The exact timing of puberty depends on the breed. Smaller breeds reach puberty between three to five months and larger breeds at around five to eight months, with does (females) becoming fertile a month or so earlier than bucks (males).

How long are rabbits pregnant?

Rabbits have evolved to reproduce quickly; pregnancies are short, lasting about a month and with an average litter size of five to eight kits (baby rabbits). Rabbits can then become pregnant again within hours of giving birth. All these factors combined means that a doe (female rabbit) can produce approximately 30 young in a single breeding season!

How can I tell if a rabbit is pregnant?

Pregnancy in rabbits isn't always obvious. In fact, you may not realise that a rabbit is pregnant until just a day or two before she gives birth when she starts building a nest with her bedding material and own fur in preparation.

To prevent your rabbit from getting pregnant again, separate the male and female immediately after the female's given birth, but make sure they can still see and smell each other to help maintain their bond.

Why doesn't a rabbit spend much time with her young?

Rabbits, unlike dogs and cats, show little maternal care. There's no need to worry if the mother stays away from the litter for most of the time - this is perfectly normal rabbit behaviour. Not doing so can be very stressful for the doe and kits, and may even lead to the mother injuring, or even killing, her young.

It's very important that they can break contact with each other (in visual and auditory terms as well as scent wise) and so you should make sure that your rabbit can get away from her litter when she wants to. Whilst this might seem like strange behaviour to us, it's actually a very good anti-predator tactic.

In the wild, staying away from the nest means that the mother rabbit is less likely to draw the attention of predators, helping to keep the litter safe. Today, our pet rabbits still display this same behaviour which is why providing enough space is so important.

Typically, mother rabbits will return to the nest for a few minutes each day (usually in the evening) to feed the litter. As kits are only able to feed for such a short time, rabbit milk is very rich and they're able to drink 20% of their body weight in just one feed!

You should visually check young kits in their nest every day for signs of potential problems, but handling should be avoided until the baby rabbits are at least ten days old. There's no need to intervene unless you have concerns about the health and welfare of the kits or the doe.

Sometimes infant rabbits will come out of the nest and need putting back gently. Stroking the mother rabbit before doing so will transfer her scent to the kit which keeps a sense of familiarity and reduces the chances of a kit being rejected. If you think a doe has rejected her litter, speak with a vet as it can be very difficult to hand-rear orphaned rabbits.

When can baby rabbits be handled?

Gentle handling of baby rabbits can begin when they're about ten days old. This is a really important period in their life, and from this point on, each kit should be positively interacted with every day for a couple of minutes at a time so that they associate being around people with a positive experience.

Doing this helps to prevent rabbits from becoming fearful of people in their adult lives. Before handling kits, as mentioned earlier, it's a good idea to stroke the doe first, rub your hands in some of the used, unsoiled nesting material or wipe a clean cloth over the doe and then the kits. This helps keep scents familiar as well as avoids transferring human scents which can reduce the risk of the doe rejecting her kits.

What do baby rabbits eat and what do they need as they get older?

From about three weeks old, kits need plenty of safe space in which to explore, exercise and play, as well as suitable objects to investigate and interact with.

The digestive system in rabbits is highly specialised and so it's important that they receive the correct diet throughout their lives to help prevent dental and digestive problems. Weaning can be a particularly tricky period for rabbits - it's crucial that they build a healthy digestive system during this time.

Did you know? To help a baby rabbit establish normal gut bacteria, they eat their mother's caecotrophs (a special type of faeces!).

Good quality hay is the most important part of any rabbit's diet. It can be introduced from ten days of age and any owner should make sure that it's a constantly available food source for their rabbits. When the kits are about five weeks old and are eating hay well, they can then be gradually introduced to small amounts of nuggets and greens. However, these greens should be introduced one type at a time, to avoid upsetting the young rabbits' digestive system.

Serious illness can be caused if young rabbits are fed these items when they're too young or in large amounts as they're simply unable to digest greens and nuggets as well as adults. Generally, kits will need to stay with their mother until they are eight weeks old, by which point they should be fully weaned.

How can rabbits be prevented from having another litter?

Why is neutering a rabbit important?

Rabbits prefer to live with at least one other friendly rabbit, and neutering is the only way to ensure that this can happen. Remember, unless a rabbit is neutered at an appropriate age, same-sex siblings will fight when they hit puberty, even if they previously got along well.

This can lead to a complete breakdown of their bond and it may be tricky to re-bond them after neutering. It's often thought that the best combination for pet owners is a neutered, mixed-sex pair. Remember, siblings will mate so don't think that because you have a brother and sister that they won't have babies!

Read our blog: Adopting a companion for my lonely rabbit (and helping them bond!)

Males can be neutered from ten weeks, whilst females are usually neutered from four months. Males are unlikely to be fertile if neutered at this age or very shortly after their testicles have descended.

Therefore, neutering at the earliest opportunity is strongly advised to prevent unwanted pregnancy and disrupting an established pair bond. Males neutered later than this can remain fertile up to six weeks after surgery and so shouldn't come into contact with an unneutered female until this time has elapsed.

Other than to prevent pregnancy, why should I have my rabbit neutered?

As well as preventing breeding, neutering can help reduce aggression (especially if the aggression is hormone-related). Additionally, scent-marking using urine and faeces is usually reduced post-neutering.

On top of this, neutering also helps protect rabbits against illness. In the case of females, around 80% of unneutered female rabbits develop uterine cancer after the age of three years. This is usually fatal, so neutering your female rabbit is a lifesaver.

Read our blog: How to keep your rabbits safe from disease.

Are you looking to adopt rabbits?

If you can offer rabbits a happy home, then please check out the lovely rabbits we have available for rehoming right now.

We also have lots of advice and information on rabbit care for pet owners so why not take a look while you're here? 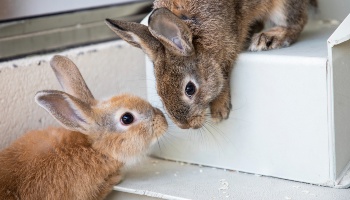 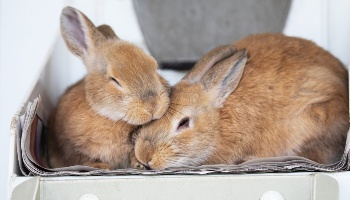 Should rabbits be kept around other animals?

Find out more about the social needs of rabbits. 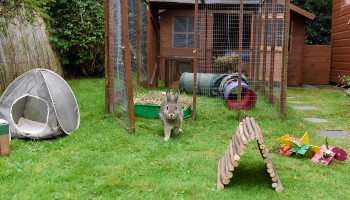 What is a suitable environment for pet rabbits?