Many people believe rabbits find being placed on their back relaxing, but this couldn't be further from the truth. As prey species, rabbits have evolved various tactics to help them avoid being preyed on. One of these is called 'tonic immobility' - sometimes referred to as 'trancing' or 'hypnotising'.

If a rabbit is captured by a predator, they become still and apparently lifeless - in effect, they're playing dead. By remaining motionless, a predator may believe the rabbit is dead, so it relaxes their grip and offers the possibility of escape. This state can also be induced when a rabbit is turned either partially, or fully over, onto its back.

Rabbits are stressed when on their backs

Rather than being relaxed, rabbits show both physiological and behavioural indicators of stress and fear before, during and after being turned over. Studies have shown that rabbits flatten their ears, widen their eyes and tense their muscles when being placed in this position - which is them showing that they're worried and uncomfortable.

While they're on their back, rabbits remain fully alert to take advantage of any escape opportunity. Once back on their feet, they'll spend more time hiding and less time exploring.

They'll also have an increased heart and breathing rate and higher levels of the stress hormone corticosterone.

The more often a rabbit is laid on their back, the faster they become still. This shouldn't be mistaken for them enjoying or getting used to the process. They've actually learned to anticipate what's about to happen, and repeatedly doing it causes them to become stressed more quickly.

Due to the fear and stress rabbits feel when placed on their back, things like general interactions, routine health checking and grooming should all be carried out without putting them in this position. However, vets needing to carry out certain procedures - such as taking x-rays or examining their teeth - may use this response if it avoids sedation or anaesthesia, which can present risks.

Follow the links below to find out more about rabbit behaviour and how to handle your rabbit. 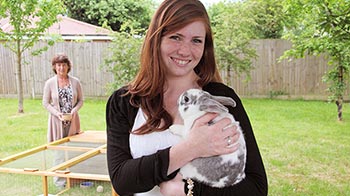 How should you hold a rabbit? 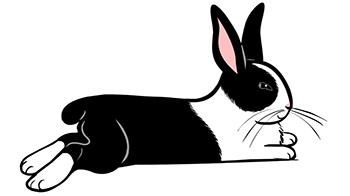 What does my rabbit's behaviour mean? 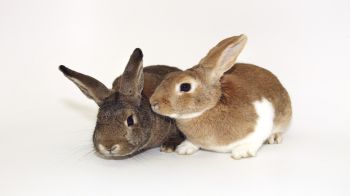 Learn about rabbit biology, behaviour with expert advice on how to keep rabbits healthy & happy.