We're handing over 350,000 signatures to Tesco bosses at its AGM today, demanding that the supermarket urgently improves the welfare of its meat chickens.

One billion chickens are slaughtered for meat in the UK each year. To see how so many chickens live you can watch our Broiler Chicken Challenge video...

Tesco is the largest retailer of intensively reared indoor chicken

The supermarket is spending more than £370 million on these chickens each year. Meanwhile, welfare groups have real concerns about the welfare of intensively-reared birds, who are genetically selected to grow fast contributing to serious health and welfare issues. These birds are also often kept in conditions where they barely have space to stretch their wings freely.

We've joined with welfare group Open Cages, in handing over more than 354,000 signatures tomorrow from animal-loving shoppers to Tesco bosses and shareholders. The powerful number of signatures have been collected through our Change.org petition, a Care2 petition and an Open Cages petition.

The potential difference Tesco could make to animal welfare is enormous

Claire Williams, our campaign manager who will be visiting the Tesco AGM, said:

"Tesco has by far the biggest market share of 'intensively reared' chicken meat, and it's their duty to ensure the animals are raised to good welfare standards. The potential difference they could make to animal welfare is enormous - why wouldn't they listen to their customers and make this hugely positive change for animal welfare?

"At the moment, the majority of standard chicken meat sold in supermarkets is from specially selected breeds of bird that are chosen because they grow really fast - in the shortest time possible. Most of these birds are actually only 36 days old when they are killed for meat, but already weigh 2.2kg. Many often struggle to walk or stand, let alone use a perch, and they can suffer from severe heart defects. It's a really concerning issue that most people wouldn¿t know about - until now - but consumers are switching on to the welfare problems of these birds and they're demanding action."

Recent polling showed 86 percent of shoppers expect supermarkets to ensure the chicken on its shelves are farmed to higher welfare standards, but the reality is very different.

Welfare groups believe that Tesco's high spend on intensively reared meat doesn't reflect a lack of customer demand for high welfare products but instead reflects how Tesco promotes chicken and its failure to provide affordable higher welfare options across all cuts.

"Shoppers are beginning to discover the true cost of the cheap chicken on our supermarket shelves, which is causing suffering to millions of birds every year. Tesco spends the most out of all retailers on intensively reared chicken and their customers expect better. Today we show Tesco that nearly 400,000 people say enough is enough: your customers want change."

Why the Better Chicken Commitment is important 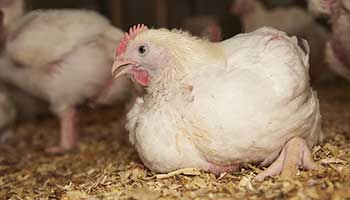 Welfare groups including ourselves are concerned that intensively reared meat chickens aren't given enough space to easily move around and be active as well as even flap their wings freely. By the time these chickens are fully grown, each bird is allocated less space than an egg-laying hen kept in a cage, and producers are not even legally required to provide the chickens with natural light.

The public who signed these petitions are demanding Tesco urgently raise its animal welfare standards by signing up to a Europe-wide initiative, known as the Better Chicken Commitment, which is being championed by ourselves alongside other welfare groups. By signing the commitment, the country's largest retailer would improve the lives of almost 380 million meat chickens every year.

"By signing up to the Better Chicken Commitment, supermarkets would be raising the basic level of chicken welfare, which includes not using these fast-growing breeds anymore. While it's not as beneficial for the welfare as if supermarkets were to sign up to a higher welfare scheme such as RSPCA Assured, it's still a step in the right direction.

"Sadly, we've seen that some supermarkets attempt to reassure concerned shoppers who write to them of their 'good animal welfare,' by referencing things like farm assurance standards, the number of yearly inspections, and their work with industry bodies. Shoppers should know that while this sounds reassuring, this doesn't always mean that animal welfare is any different than the industry standard, or sometimes any more than the legal minimum.

"For example, providing perches, other types of enrichment and even free-ranging is not that meaningful if the birds themselves are growing too quickly and can have difficulty walking by the end of their lives or are physically unable to use the enrichment. One supermarket even states that without any supporting science or evidence that the Better Chicken Commitment would deliver them a more 'sustainable, healthy and affordable' option, they would be unlikely to sign up - which sadly, shows that animal welfare doesn't appear to be on their list of priorities. We hope this petition demonstrates to them that this is a serious and important issue for the public."

We're using research and harnessing consumer support with the aim of a significant and long-lasting change from supermarkets for the better for meat chickens. Though the petition is being handed into Tesco tomorrow, members of the public can still get involved and give their voice to the campaign by emailing Tesco or other retailers by visiting our Cheap Chicken campaign online now.