Have you seen our broiler chicken challenge short film? 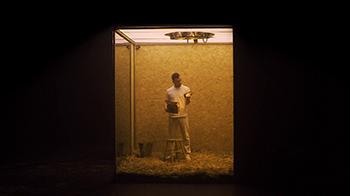 A massive 86 percent of people believe the chicken they choose on supermarket shelves is higher welfare, but we've revealed that the vast majority of chicken we buy is kept in poor conditions.

Today we're raising awareness of the plight of the intensively reared, fast-growing breeds which account for the vast majority of the UK chicken market with a hard-hitting video.

What is the film about?

In the film, an actor gets a small taste of what it's like for millions of chickens bred for meat each year. Gaining weight unhealthily fast and living in a space crowded by others may seem tough to comprehend, but for a large majority of meat chickens, this is a reality for the duration of their short lives.

This video is a fresh way for us to give people an abstract insight into how meat chickens are raised - something most people just don't know about, and this video aims to really hit home how so many of these birds are suffering. These birds are bred to put on weight very quickly, meaning that as they grow, many struggle to walk stand properly or perch. It puts real pressure on their hearts and leaves them open to painful foot and leg problems. On top of that, at their biggest, they have allocated to them less space than an A4 piece of paper each.

When you consider the enormous number of chickens that are raised each year - over 1 billion - it's hard to comprehend such a huge number of birds living in these conditions, when in reality, things could be so much better if shoppers were aware, and therefore in a position to demand their supermarkets make a commitment for change.

The 'Chicken Challenge' video, which sees 'Michael' locked up in a container 'living like a chicken', is part of our Better Chicken Commitment campaign, which calls on UK supermarkets to raise welfare standards of these birds across their supply chain.

In the video, he's given weights in quick succession to add onto his clothing, to replicate the unhealthily fast growth rates of most broiler chickens, which have been specially bred to provide maximum meat in the minimum amount of time. He experiences the discomfort this causes, including breathlessness and difficulty moving.

Michael then experiences the overcrowded conditions the birds face as they quickly grow in size, with mannequins continuously placed in his surroundings until leaving him little space to move around and sit and rest, also weary from the weights.

Chicken meat is a huge industry in the UK

In the UK, people spend £1.5 billion each year on intensively reared chicken compared to just £281.9 million on higher welfare options:

The depressing figure comes despite 86 percent of the public saying they expect the supermarkets to ensure all the chicken they sell is farmed to higher welfare standards.

When questioned, 77 percent of people who buy chicken meat say they're appalled to learn that broilers suffer due to their fast growth rates.

We have serious concerns about intensively reared birds. The most popular breeds have been genetically selected to grow so fast that many often struggle to walk or stand, and can suffer from severe heart defects. They can reach their average slaughter weight just 35 days after hatching - only a little longer than the time spent in the egg. Rapid growth rates can cause health problems such as leg disorders and heart failure. Research shows many (approx. 30 percent) are likely to experience pain from leg and foot issues.

Other concerns are they're not given enough space to easily move around and be active and flap their wings freely. This puts the birds at a greater risk of suffering leg lesions, such as hock burn and foot pad burn.

Ask Tesco to sign up to The Better Chicken Commitment

As part of the Better Chicken Commitment, we're urging supermarkets and retailers to commit to raising welfare standards across their supply chain of chicken by 2026. The campaign comes as part of a European-wide effort from multiple organisations, dedicated to improving the lives of the millions of broiler chickens that are currently reared across the continent.

We're also targeting supermarkets using research and harnessing consumer support with the aim of a significant and long lasting change for the better for meat chickens.

Tesco is the UK's largest retailer and spend on intensive indoor chicken meat is more than Asda and Morrisons combined. A change in policy by Tesco would have the biggest impact on the lives of broiler chickens - over 380 million animals would benefit every year! Therefore, we're asking members of the public to get involved with our campaign and email Tesco by visiting our cheap chicken campaign.