In the UK, people spend £1.5 billion each year on intensively reared chicken compared to £281.9 million on higher welfare options: 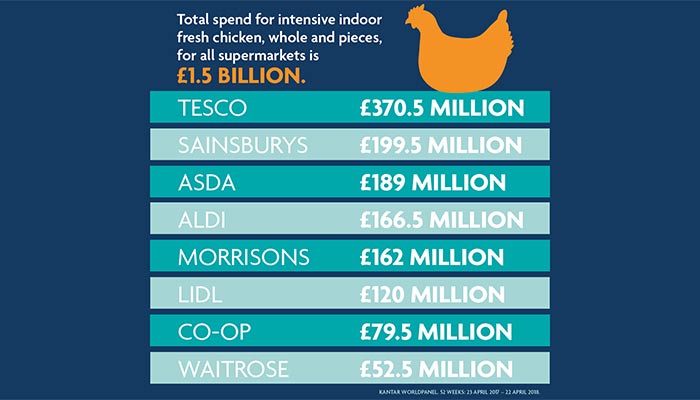 The depressing figure comes despite 86 percent of the public saying they expect the supermarkets to ensure all the chicken they sell is farmed to higher welfare standards.

Ten years since celebrity chefs Hugh Fearnley Whittingstall and Jamie Oliver campaigned against retailers to improve poor chicken welfare through 'Hugh's Chicken Run' (2008) and 'Fowl Dinners' (2008), we reveal that chicken welfare has improved little in the decade since.

Supermarkets were quick to promise better welfare for chickens but ten years later we have not made much meaningful progress and although shoppers believe they're buying higher welfare options our research shows that a vast majority of birds sold are intensively reared indoors.

More meat chickens are produced than any other land farm animal in the UK, with around one billion reared each year. Globally, chicken is expected to become the largest meat sector in the world by 2020.

We have serious concerns about intensively reared birds. The most popular breeds:

In fact, by the time they're fully grown each bird is allocated less space than an egg-laying hen kept in a cage. Producers are not even legally required to provide the chickens with natural light.

Supermarkets may claim that higher welfare options - such as RSPCA Assured, free-range and organic - do not sell as well,  but research commissioned by us found:

Shoppers are being asked to pay premium prices for higher welfare chicken.

We've approached different supermarkets several times over the years about chicken welfare issues, but many maintain that shoppers don't want to spend extra on higher welfare chicken meat. However some supermarkets sell higher welfare chickens for just 71p more per kilogram than the cost of standard intensively reared birds, proving that 'better chicken' does not have to cost shoppers much more.

We believe that supermarkets need to be more reflective of their customers' expectations and sign up to the Better Chicken Commitment.

We have an opportunity to change meat chicken welfare

As Brexit approaches, we believe the Government's new Agriculture Bill offers opportunities to improve farm animal welfare. With this we want to see mandatory method of production labelling on meat products, giving shoppers a real opportunity to make an informed choice about the food they eat. This would also give further incentives to farmers to rear to higher welfare standards.

As part of the Better Chicken Commitment, we're urging supermarkets and retailers to commit to raising welfare standards across their whole supply chain of chicken by 2026. The campaign comes as part of a European-wide effort from multiple organisations, dedicated to improving the lives of the millions of broiler chickens that are currently reared across the continent.

We're also targeting supermarkets using research and harnessing consumer support with the aim of a significant and long-lasting change for the better for meat chickens. Members of the public can get involved with the campaign and email their retailer.