Animal fighting - such as dog fighting, cockfighting, bear baiting and badger baiting - was outlawed in the UK in 1835. While, thankfully, most of these bloodsports can now only be found in history books, some still continue to this day across England and Wales.

We have a Special Operations Unit (SOU) made up of a team of investigators who are trained in monitoring and uncovering organised animal cruelty.

The world of animal fighting is incredibly dangerous and our investigators often put themselves in harm's way to expose this cruelty. These can be some of the most difficult cases to uncover as they're extremely complex and can involve large numbers of criminals who are very often linked to other types of crime.

It can take months or even years to gather enough evidence to bring a case to court. It's one of the most extreme forms of animal cruelty we investigate.

Suspect someone is taking part in animal fighting? Call us in confidence on 0300 1234 999 or report it to the police.

Despite this cruel activity being illegal for over 180 years, we still investigate and prosecute dog fighting offences. The dogs used are selected based on their inherited aggressiveness to fight instinctively and are pitted against each other with the aim of inflicting as much pain and damage as possible. Most dogs used for fighting will ultimately either be killed in the ring, die as a result of their injuries or in some cases killed by their owners.

How we combat dog fighting

We received more than 9,000 reports of organised dog fighting between 2015 and 2020. Our SOU follow up on intelligence about those involved in training and preparing dogs to fight as well as organising the fights themselves, and have rescued dogs from horrendous cruelty and prosecuted perpetrators.

Dog fighters are generally incredibly secretive so catching them in the act can be extremely difficult. We rely on tip-offs from members of the public and other agencies who may be investigating other criminal activity.

The brutality of dog fighting

Dog fights usually take part in quiet, private locations, such as in an industrial unit or farm building. Participants will spend months training their dogs in preparation, much like boxing, the fighters will have to hit a target weight to take part. Organisers will create a fighting 'pit' for the dogs to fight within.

Dogs who have been used in fighting often have serious injuries to their head, ears, front legs and chest that are caused as they go head-to-head in a pit. They will also have injuries of different ages, some old scars and some fresh wounds.

Dogs can suffer serious or fatal injuries while fighting, with some injured dogs being killed or abandoned. After fights, many dogs are left with horrific injuries and rather than taking them to a vet, dog fighters will perform crude surgeries without anaesthetic - often using staple guns or super glue to close up wounds.

Losing dogs can be cast aside or destroyed by their owners while winning dogs will likely go on to fight again and can be worth huge sums of money to buy or breed from. Guests will be invited to bet on which dog will win and large sums of money can be won both by gamblers and by owners.

Kali was found cowering in a hedge 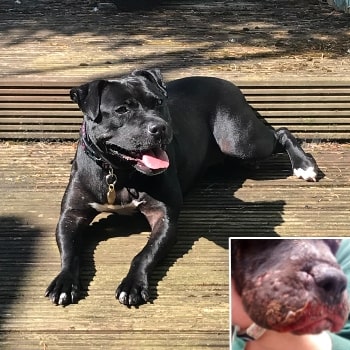 Vets contacted us after a local charity collected a bloodied and scarred Staffordshire bull terrier who'd been found cowering in a hedge by a passerby. She was covered in bite marks, wounds and scratches, predominantly around her muzzle, ears and legs; consistent with dog fighting.

Vets thought the freshest injuries were just a few days old so it's believed she'd been used for training or fighting before either escaping or being abandoned. We took Kali into our care while the SOU investigated. She's now been successfully rehomed and is loving life with her new owners who spoil her rotten!

Between 2012 and 2020 we've received more than 350 reports of cockfighting. While this was traditionally considered a 'rural pastime', now our SOU are following up on intelligence of cockfights happening across the country from urban allotments and gardens to farms and agricultural settings in the heart of the countryside.

Despite being illegal for almost 200 years, cockfighting is still a popular sport amongst certain societal groups having been passed down from generation to generation as part of their culture. We've often come across fathers and sons who are involved in the sport, with fathers passing it down to their son in order to continue the bloodline of their birds.

The cruelty of cockfighting

Cockerels will be bred specifically for fighting and will be trained using practice birds. They use muffs to cover their sharp claws - or spurs - during training. When they fight they'll usually pitch one bird against another and, if they want to up the stakes, they'll sharpen their spurs to attach spikes or blades to their legs to inflict more damage.

Normal fights can last anywhere between 10 minutes to an hour, while fights with sharpened spurs may only last a few minutes as one puncture wound could kill a bird quickly. They often fight birds to the death and a winning bird can become a 'champion' after just a few victories.

Quail fighting is also a popular pastime amongst certain social groups. Quail and Francolin Partridges are used to fight - in a similar fashion to cockfighting - but often in a much less organised manner and usually always inside homes and domestic settings, making it extremely difficult to detect and trace. 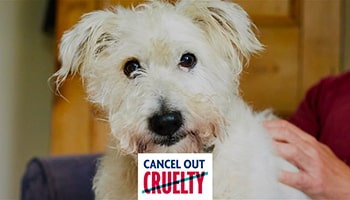