Our Special Operations Unit (SOU) is a specialist team of officers and intelligence and research managers who work alongside our frontline uniformed officers to tackle large-scale, organised and serious animal crime.

Animal fighting - such as dog fighting, cockfighting, bear baiting and badger baiting - was outlawed in the UK in 1835. While, thankfully, most of these bloodsports can now only be found in history books, some still continue to this day across England and Wales.

There is a growing problem with rural crime and our SOU are increasingly investigating more and more incidents of badger persecution, hunting with dogs and wildlife crimes such as bird trapping.

Puppy breeding has long provided irresponsible and illegal breeders to get rich with little regard to the welfare of a mother and her puppies. Puppy farmers will produce a high volume of puppies for profit but will hide the poor conditions and health of the puppies to fool unsuspecting buyers.

Over the past decade, we've received almost 30,000 complaints relating to the illegal puppy trade in England and Wales. While our local inspectors will look into complaints initially and deal with smaller investigations, our SOU often becomes involved when investigations become more complex, involve a complicated web of different individuals or involve the importation, commercial movement and high-value trade of dogs.

The team has followed up on thousands of reports which, in some cases, have led to shutting down large puppy farms as well as intercepting sophisticated puppy dealing rings making millions of pounds by selling low-welfare dogs for high prices to unsuspecting members of the public. Officers have successfully prosecuted individuals and gangs for welfare offences, fraud offences and licensing offences, rescuing many dogs and helping bring closure to many families who have been left heartbroken.

When our SOU officers found pug Phoebe at a puppy farm in Greater Manchester, she was huddled in a washing up bowl surrounded by filth in a cold, damp concrete pen. It's thought she'd been used as a breeding bitch to produce pug puppies; one of several 'designer' dogs that command huge prices.

She was rescued, along with another terrier called Patsy, and taken into our care while officers investigated. Now she lives a carefree and cosy life with the Mustow family in Lancashire. She befriended the family rabbit, Blossom, and enjoys going on long countryside walks. 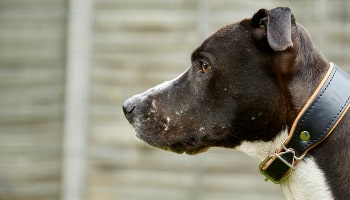 Why bloodsports involving animals like dog and cockfighting are illegal.