Neutering and contraception methods for ferrets

Neutering is necessary for many pets to prevent unwanted pregnancy and protect against certain medical conditions, as well as prevent some behavioural issues. Ferrets, like other pets, need to be neutered for these reasons. However, having your ferret neutered is more complicated than it is with other pets, such as cats and dogs.

Here's everything you need to know about ferret neutering.

What are neutered male ferrets called?

Can ferrets die if not mated?

The consequences of not having a female ferret neutered can be serious. Female ferrets called 'jills' are 'induced ovulators', which means they need the act of mating to stimulate the ovaries to release eggs. If the jill does not ovulate, she will continue to produce oestrogen (she will stay in season until they're mated).

Remaining in season can cause severe health problems for a jill, including alopecia (hair loss) and even death from oestrogen-associated anaemia (deficiency in red blood cells).

There are various ferret neutering options available and each comes with pros and cons. Methods to prevent the health issues associated for jills include:

Some owners may use vasectomised hoblets to bring their jills out of season through the act of mating.

There are benefits and risks to each method, but they all prevent unwanted pregnancy and can help reduce aggressive behaviour. They can also help reduce the typical musky smell associated with the maturing male.

Please also seek advice with your vet to decide which method is best for your pet.

Having your ferret surgically neutered (castration and spaying)

Surgical neutering is a permanent procedure and is often the most cost-effective method. However, in both sexes it's been linked with the occurrence, some years later, of hyperadrenocorticism (adrenal disease) and adrenal tumours.

We still recommend neutering as a permanent way to stop females being in season and reduce aggression in males. However, it's important to be aware of the signs of hypoadrenocorticism and to remember that treatment may be needed in the future.

If castration or spaying is performed, it's generally best that it shouldn't be done until after puberty, to delay the possible onset of adrenal disease.

The most common contraceptive method for ferrets is the chemical implant, placed under the ferret's skin whilst he or she is sedated. This happens at regular times throughout the ferret's life.

'Deslorelin' implants can be used in both sexes and works to reduce the release of sex hormones from the brain. It also removes the trigger for sex hormone production in the adrenal glands. These are generally very safe, but can be costly.

The implant's slow-release action means that they're generally long-lasting, depending on the strength of the implant used and the time it's implanted. Implants can generally last up to 18-24 months before another one is needed.

Yearly hormonal injections for the jill were a common method of stopping oestrus. These are still available, but are difficult to source and also expensive unless many ferrets are being injected at once. 'jill jabs' are usually given at the beginning of the breeding season, in early spring.

A vasectomy is a process of sterilising a male ferret by cutting the tubes that carry sperm from the testicles to the penis.

The process of vasectomy doesn't affect the hob's capability to mate. Mating jills with a vasectomised hob, or 'teaser', to bring them out of season has been common practice in the UK for many years, largely thanks to its ease and low cost.

However, although mating is a natural behaviour, the act itself is often violent and very stressful for the jill. Repeated matings may result in damage to the jill's neck, so this practice is not recommended.

Neutering can cause Hyperadrenocorticism

Neutering both male and female ferrets can lead to the development of a hormonal condition called hyperadrenocorticism. This generally happens several years after neutering.

Signs of hyperadrenocorticism in ferrets include:

Early detection, treatment with a deslorelin implant and appropriate monitoring can all help manage symptoms.

What's the best neutering or contraceptive method for ferrets?

As a ferret owner, it's important to be proactive in managing their reproductive issues. We advise that ferrets are either surgically neutered or that a chemical method is utilised. A combination of both may also be used.

However, please always discuss your options with your vet to avoid unwanted pregnancy and health issues. They'll be able to explain possible side-effects and costs, and knowing the benefits and risks involved in all methods will help you make an informed decision as to which is best for your pet.

For animals rehomed by our animal centres, surgical neutering is our standard approach. This is our choice as it's the most cost-effective and permanent method. If you're thinking of adopting a ferret, you'll need to be aware of the signs of hyperadrenocorticism and remember that your pet may need treatment for it in the future.

Find out more about caring for ferrets as pets. 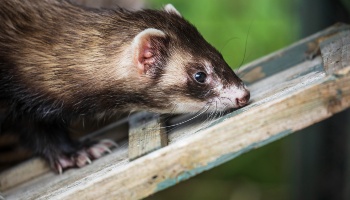 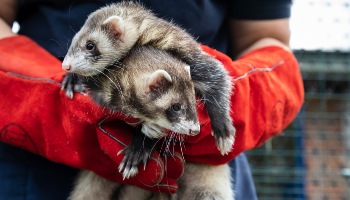 Find out more about the social needs of ferrets. 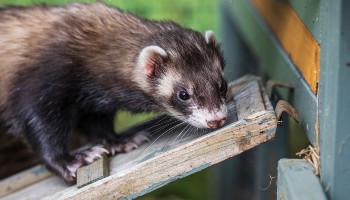 Find out more about the behavioural needs of ferrets