Gold medal, Gold trophy, Goldfish? A pet is not a prize or something to be won.

None of the fun at the fair

Fairs can evoke a sense of nostalgia for many, with fairground jingles, sugared doughnuts and arcade game prizes. Sadly, there's no fun at the fair for the animals given away as prizes. While many of us would not accept a dog, cat or rabbit as the result of winning a game - receiving goldfish as prizes have become all too commonplace across England and Wales.

Can you help us make pets as prizes a thing of the past?

Unfortunately, we regularly receive calls relating to animals being given away as prizes, particularly goldfish - who are often prized off at fairgrounds across England and Wales. These goldfish are often held in unsuitable plastic bags for long durations and taken to homes that aren't adequately prepared to meet their welfare needs. We think you'll agree that while candy floss comes in bags, pets shouldn't.

Life in a bag 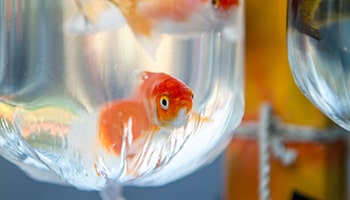 Goldfish are easily stressed and very often, fish that are won as prizes suffer miserably from shock, oxygen starvation or die from changes in water temperature, and many will die before their new owners can even get them home.

It's already illegal in Scotland

We need supporters like you to take the action and let your local council know that pets as prizes are a no-win situation.

By taking action, you'll be encouraging your local council to stop this practice on council-owned land, as well as write to their respective Government for wider change.

When it comes to pets as prizes, you win, they lose. 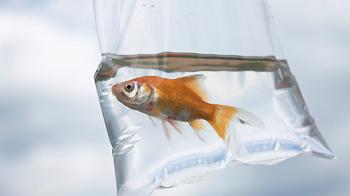 From pets to rodeos, find out what our views are and how they guide our animal welfare work.