You should keep your guinea pig with at least one other friendly guinea pig, unless you're advised otherwise by a vet or clinical animal behaviourist. If they're left on their own for long periods, guinea pigs can develop abnormal behaviour and may suffer.

Here's what you need to know about keeping guinea pigs together.

Guinea pigs are naturally sociable and prefer the company of other guinea pigs. Kept together, they form a 'pecking order' and some animals become more dominant than others. Good combinations for guinea pigs include a neutered male and one or more females, two females or neutered brothers (if they've been reared together).

Neutering female guinea pigs isn't common, as the operation is more complicated, but you should get male guinea pigs neutered unless you intend to breed from them and have plans in place to care for parents and babies. Your vet will advise on neutering.

Introduce new guinea pigs to each other gradually and under supervision, preferably somewhere that's new to both guinea pigs. Guinea pigs brought up together usually get on, but adult males introduced for the first time may fight. Consult a guinea pig behaviour expert if you're unsure or have problems.

You'll need to make sure your guinea pigs have places where they can escape from their companions if they want to. If there aren't enough places to spend time away from each other, they can become stressed and may bully lower-ranking individuals. You'll also need to give them enough resources (such as shelter, food, water and hiding places) for all guinea pigs at all times.

Guinea pigs who've been well handled by people from a young age can learn that humans are friends and companions. If they receive little handling when young, or are roughly handled at any age, they may find human contact distressing and can be afraid, run away, hide or show aggression.

Guinea pigs living indoors can see humans as important companions. If your guinea pig has to be kept alone, it's vital to give them companionship by interacting with them everyday.

Keeping guinea pigs with other pets

Always keep a constant eye on your guinea pigs when they're with another animal or person who may deliberately or accidentally harm or frighten them, or if they're with a cat or dog, even if you know they're good friends. Guinea pigs will usually be scared of cats and dogs because they're natural predators, but if they're introduced carefully early in life they can develop friendships.

Can guinea pigs and rabbits be kept together?

This is because both animals:

Read more on keeping rabbits and guinea pigs together. 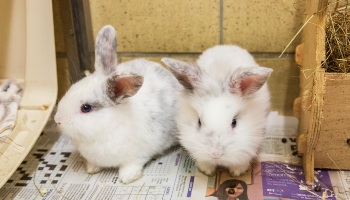 Keeping rabbits and guinea pigs together

Our position on keeping rabbits and guinea pigs together. 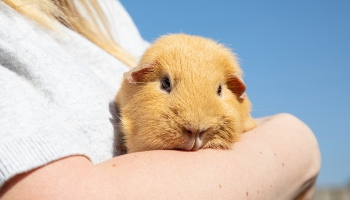 Find out more about the health and welfare needs of guinea pigs. 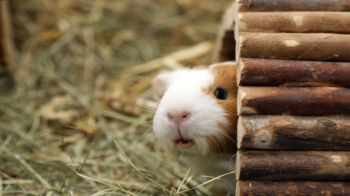 Find out more about the behavioural needs of guinea pigs.