Farmed rabbits are often housed in buildings containing rows of bare wire cages, which may be arranged in a single row or stacked in two or more tiers.

A small number of farms may rear rabbits in improved conditions in open floor pens, and may provide them with hay in addition to their diet of pellets.

It is very difficult to get any accurate, up to date figures on the number of rabbits farmed for meat in the UK. We believe that any rabbit farming industry in the UK is fairly small-scale. Greater numbers are reared in other European countries. In 2011, around 326 million rabbits were slaughtered in the EU as a whole¹.

The breeds of rabbit that are commonly farmed include the New Zealand White, Californian and Carolina. 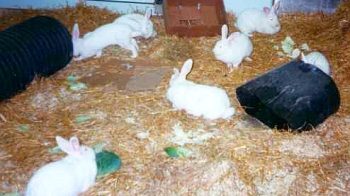 Farmed rabbits - what are we doing?

Some of the work we're doing to try to improve the welfare of farmed rabbits. 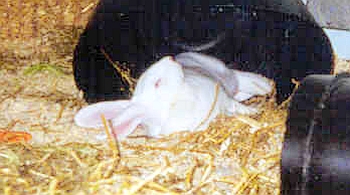 Farmed rabbits - how can you help?

Some of the things you can do to ensure more farmed rabbits are reared to higher welfare standards.