Most meat chickens are reared in large, closed, buildings, where temperature, artificial lighting, ventilation, food and water are carefully controlled.

Food and water are provided in lines along the length of the building and wood shavings cover the floor.

Typically, around 25,000 birds are housed together within a building, but some can house around 50,000 birds. There can be several buildings on a farm.

Most birds are reared at a stocking density (amount of space provided per bird) of 38kg per square metre, which is around 19 two kilogramme birds for each square metre of floor space.

Light levels can be kept low to encourage the birds to eat more and move around less, which maximises their growth rate.

A smaller proportion of meat chickens are reared in indoor systems in conditions that improve their welfare. These systems are similar to those described above, but include improvements, such as:

In addition, slower growing breeds of chicken may be used.

Meat chickens may be reared in systems that allow them access to an additional outdoor range area for part of their lives.

The chickens are able to access the range area though 'popholes' in the side of the building.

The law requires free-range and organic systems to meet certain requirements, for example, relating to space within the building and the age of the birds at slaughter.

It usually takes five to six weeks for the birds to reach the desired weight for slaughter of around 2.2 kilogrammes. They are then caught, placed into crates and transported to the abattoir.

Over 1 billion meat chickens (broilers) were slaughtered in the UK in 2017¹.

Find out about some of the key welfare issues for meat chickens. 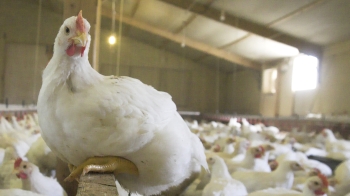 Some key meat chicken welfare issues that concern us. 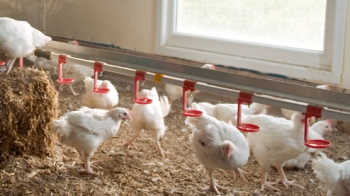 Meat chickens - what are we doing?

Some of the ways in which we're working to help improve meat chicken welfare in the UK and beyond. 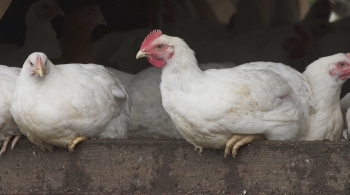 Meat chickens - how can you help?

How you can help to improve the lives of chickens reared for meat.