We did it, thanks to you!

The maximum sentence for animal abusers will now go up from six months to five years.

A long awaited victory for animals is finally here

On 29 April 2021, we celebrated a milestone victory for animal welfare and we couldn't have done it without you. After years of dedicated campaigning from our teams and supporters, the UK Government has passed the Animal Welfare (Sentencing) Bill in England.

The UK will now boast a law which will transform animal welfare by increasing sentences for animal cruelty from six months to five years.

Now that the Bill has completed all stages in the Houses of Parliament and has received Royal Assent, this means that animal abusers convicted under the Animal Welfare Act 2006 could face up to five years in prison.

This means that animals who have suffered unbearable, unnecessary cruelty at the hands of human beings, will finally get the justice they deserve.

This brings us in line with the rest of the UK

In 2017, the UK Government pledged to reform the maximum sentence for those prosecuted under the Animal Welfare Act, receiving support from cross-party politicians. This bill was brought forward by MP Chris Loder and Lord Randall of Uxbridge as a Private Members' Bill in June 2019.

We were overjoyed to welcome this highly anticipated change in law, which will bring us in line with both Scotland and Northern Ireland where convicted animal abusers can be jailed for up to five years. We're proud that the UK has some of the best animal welfare standards around, which is only fitting for a nation of animal lovers.

The new law came into force in June 2021

The Animal Welfare (Sentencing) Act has now become law and came into force on 29 June 2021 - a move for which animal welfare groups and MPs have long campaigned - and will cover both England and Wales. This will now give courts greater opportunity to impose harsher sentences for the worst cases of cruelty, and will act as a deterrent for potential offenders.

Thank you for your support and helping us achieve this huge change in law, thank you for speaking up on behalf of animals who needed your voice.

When we come together we can give animals a voice

What we've achieved for tougher sentencing goes to show how we have the ability to change the lives of animals who can't for themselves. Subscribe to our campaigns newsletter so you can get involved and make changes for many more. 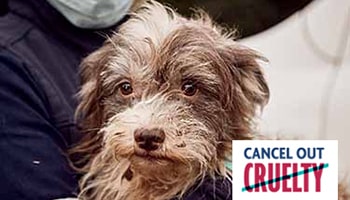