We strongly believe that primates, as highly intelligent and complex wild animals, are not suitable pets.

Similar to humans, they form intricate relationships, experience emotions, and some can reflect on their past experiences and feelings.

Despite it being very difficult to meet the welfare needs of primates in captivity, thousands of primates, such as marmosets, capuchins and squirrel monkeys, are currently being confined inside UK homes.

Take action for primates in Wales

Update to the England primates campaign

After receiving an incredible 50,000 signatures, we handed our petition to end the primate pet trade in England in to the then UK government. Since then, the outgoing UK Government announced that it favoured a ban and launched a call for evidence on how this could work, which closes in January 2020. We'll be responding to the consultation and welcome the commitment to act on this issue.

Why we campaign for primates

Primates are highly social beings; so isolated primates endure a life of torment.

Not only can they become depressed, but they can self-mutilate, pluck out their own hair, or display behaviour such as rocking and self-hugging. All of these symptoms suggest suffering.

Primates were kept alone in 60 per cent of the cases we investigated.

Like humans, primates rely on their mothers, often until adulthood and beyond. Yet they can be torn from them at just a few weeks old to be hand-reared by humans, a distressful and cruel practice.

This is no replacement for their mother's care, and this can cause behavioural issues throughout their lives.

Primates need a spacious and enriched environment that challenges their intelligent brains and allows for them to behave like primates should.

Often primates are kept in entirely inappropriate housing such as parrot cages, aviaries and sheds. These types of environments can't provide for their complex physical and social needs.

Did you know every single pet primate taken in by a Cornwall monkey sanctuary arrived with behavioural problems? These include teeth-grinding, self-biting and constant pacing - evidence of the mental distress they experienced as pets.

Pet primates often have poor diets and little or no access to sunlight. Many develop Metabolic Bone Disease, leading to fractured or deformed bones, painful abscesses and tooth decay. The condition is common in primates weaned too early from their mothers.

Do you agree primates shouldn't be pets? Would you like us to follow in the footsteps of 15 European countries who have already introduced a ban on keeping primates as pets, for either all or some species? 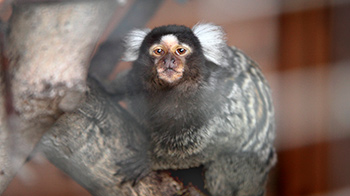 We're against keeping of primates as pets and are calling for a ban. Find out how you can help.