A nest is a structure or place made or chosen by a bird for laying eggs and sheltering their young. There's a lot of variation in the types and location of nests created by birds who live in or migrate to and from Britain.

In England and Wales - all wild birds, their young, nests and eggs are protected under the Wildlife & Countryside Act 1981.

Here's everything you need to know about bird nests in the UK and how you can do your bit to help Britain's nesting birds!

Different types of nests and where they are found

Nests vary greatly, from simple twig platforms to intricate structures built of materials such as twigs, moss, grass, mud and feathers. Some species don't even use nesting material.

Some birds nest in trees and others on the ground

Cup-shaped woven nests are typically found in trees and bushes. Some species, such as blue tits, ducks and owls, use tree cavities, and others, such as the grey partridge, even nest under hedges.

Lots of species nest on the ground in locations ranging from heathlands to coastal regions, with nests and young carefully camouflaged. Some species build nests, while others use simple scrapes in the ground.

It's not just seabirds who use cliffs and sand dunes for nesting - species such as swifts will nest in the cavities of rock faces. Puffins even use disused rabbit burrows on cliff-top nesting sites.

Many species use buildings as nesting sites, including swifts, which nest under the eaves of buildings. Species such as pigeons and some gulls also commonly nest on building roofs.

When baby birds are born

In the UK, birds usually breed in the spring and summer. However, species such as crossbills may lay their eggs as early as January to coincide with food availability (they eat pine seeds), while pigeons and doves nest all year round.

Factors such as unusually warm weather may trigger birds to begin nesting early, and many species will lay more than one clutch of eggs during the breeding season.

For some species, nests can also provide important sites to roost in at other times of the year. For example, over a dozen wrens might congregate in a nest for shelter on a winter's night. Some species also reuse their nests the following year or reuse old nests of other species.

How to help nesting birds

There are hundreds of different species of wild birds that breed regularly in the UK. Some bird populations - such as house sparrows and starlings in urban areas - are declining, partly as a result of the loss of nest sites.

You can help nesting birds by:

Birds and their nests are protected by law

All wild birds in England and Wales are protected under the Wildlife & Countryside Act 1981. It's an offence under the Act - subject to certain exceptions (such as the control of a species for permitted reasons under licence) - to intentionally take, damage or destroy the nest of any wild bird while that nest is in use or being built.

It's also an offence, except under licence, to take or destroy an egg of any wild bird or to kill, injure or take a wild bird or their young.

For over 80 species of birds (such as barn owls, bitterns, kingfishers and goshawks) listed in Schedule 1 of the Act, it's also an offence to intentionally or recklessly disturb them:

What's more, for species included in schedule ZA1 (birds who reuse their nests), which includes ospreys, golden eagles and white-tailed eagles, it's an offence to intentionally take, damage or destroy their nests even when they're not in use.

If you find a dead bird in your garden, please report it to the Garden Wildlife Health Project. However, please note that in the winter months, avian flu may be a problem, so please check our avian flu advice before taking any action.

Follow the links below to find out more about helping the wild birds in your garden. 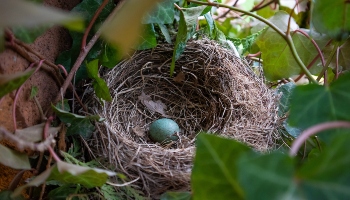 When you can and can't move bird nests. 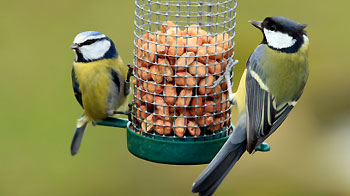 What garden birds eat and how to attract them to your garden. 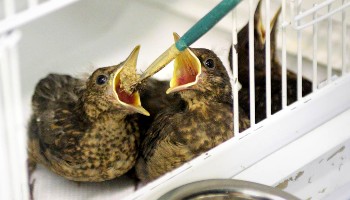