The ways in which dairy cows are farmed in the UK can vary, but some methods are more widely used than others.

Dairy cows lactate (produce milk) for about 10 months after calving. The average UK dairy cow produces almost 8000 litres of milk each year and has just under 4 lactations (milk producing cycles) in her lifetime of typically six and a half years.

In the UK, dairy cows have traditionally been kept on pasture during the grass growing (spring and summer) seasons and housed indoors during the winter. This remains the most common way of housing dairy cattle today. 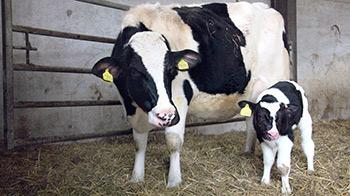 Cubicles are individual bedded compartments in which the cows can lie down. They usually have a concrete base ¿ often covered with a cushioned rubber mat or mattress ¿ which can be topped with bedding material such as sawdust, wood shavings or straw.

Some cubicles are 'deep bedded', which means the concrete base is hollowed out and filled with a deep layer of bedding, most commonly sand.

A house with cubicles will also contain areas where the cows can go to feed and drink and, sometimes, additional 'loafing areas' where they can go to congregate and socialise.

Deep litter yard housing is very similar to cubicle housing, except the cows are provided deep bedded yards to lie down in, instead of individual cubicles.

Find out about some key welfare issues for dairy cows. 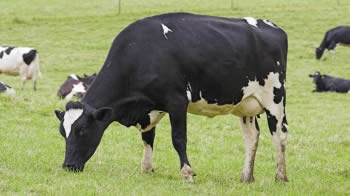 Some key dairy cow welfare issues that concern us.

Dairy cows - how can you help?

Some ways in which you can help improve the lives of dairy cows.