8 reasons why you should adopt a rescue guinea pig

8 reasons why you should adopt a rescue guinea pig

Twelve years ago whilst volunteering at a local wildlife hospital, four guinea pigs were brought in as their owner was ill and could no longer cope with caring for them. Being a wildlife hospital, we weren't really well equipped for domestic pets and so I offered to take them home. From there, my love for guinea pigs just grew and grew! 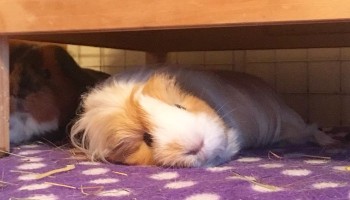 I had guinea pigs as a child but it was only as an adult that I truly realised just how wonderful they are. For such small animals, they really do have big personalities and just like humans, they're all so different. I currently have five guinea pigs - Penny, Milo, Dory, Dotty and Teddy; all rescued from different RSPCA branches across the country.

The stories behind my five guinea pigs

Penny was adopted from RSPCA Walsall, Milo and Dory from RSPCA Rochdale and Dotty and Teddy from RSPCA Manchester & Salford branch. Penny, Milo and Dory were all rescued from similar circumstances; homes where breeding had got out of control resulting in over 100 guinea pigs living in dirty, cramped conditions. 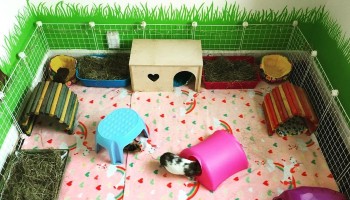 Poor Milo was actually living in a hamster cage when he was rescued. Dotty and Teddy were a bit luckier! They were born in my care as I was fostering two female guinea pigs for RSPCA Manchester & Salford. Both were on pregnancy watch and they had seven babies between them! I decided to adopt the girls from each litter to bond with my existing trio so I now have five happy piggies that have their own bedroom in my house.

When people think about getting guinea pigs as pets, they often don't consider adopting from a reputable rescue but there are so many advantages to doing so and the whole experience is so incredibly rewarding.

Rescues know their animals! They spend a lot of time working with them and establishing their personalities so they can match the animals to you and your family whilst also meeting the requirements of the animal.

I also foster for my local RSPCA and so if adopting guinea pigs isn't something you can permanently commit to at the moment, then maybe consider getting in touch with your local guinea pig rescue and enquire about fostering. There are always ways you can help! 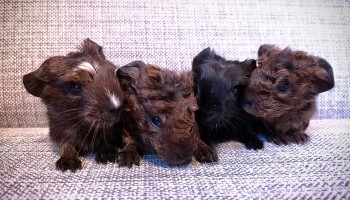 If you're considering welcoming some guinea pigs into your family, then please do consider adopting. Guinea pigs have so many cute quirks; from squeaking the house down in anticipation of food when they hear the fridge door open, to flopping over for a nap and popcorning (doing little excited jumps) when they have their cage cleaned! They're such endearing animals and they really do bring so much joy.

Find out how to care for guinea pigs.

Meet the rescue animals ready and waiting for their forever homes right now: