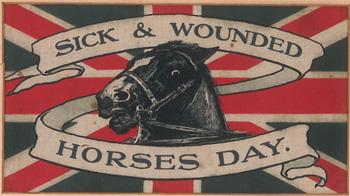 Within weeks of war being declared we started the Fund for 'Sick and wounded horses', which raised over £250,000 (the equivalent of over £12 million today) between 1914-18.  The King even made a donation.

We helped establish forward treatment stations and equipped these with 28 motor ambulances to help injured animals get to hospitals quicker. The fund also paid for 180 horse drawn ambulances, the main form of transport for horses injured in war.

"Animals have been exposed to very severe trials and hardships and have suffered heavily, not only as battle casualties, but through the exhaustion and loss of health consequent on the severe stress of work.

"Their lot has, however, been greatly lightened, and their comfort in sickness materially added to by the assistance, which the RSPCA Fund has been able to give." 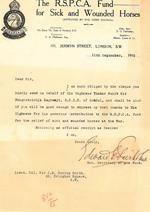 As horses were being subjected to new types of warfare, including gas attacks. The fund began paying for specialist veterinary laboratory equipment and isolation units, which were vital in treating animals suffering the effects of gas attacks and burns.

During the war we didn't just provide emergency medical help. We also provided logistical support to help the AVC save and look after injured horses. The fund paid for: 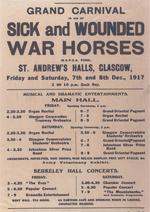 We didn't confine our support to British forces. The fund provided eleven motorised ambulances to the American army, as well as provided assistance to the Canadian army.

By the end of the war the Fund for Sick and Wounded Horses had become truly international, supporting activities in France, Italy, Mesopotamia, Salonika and Egypt.