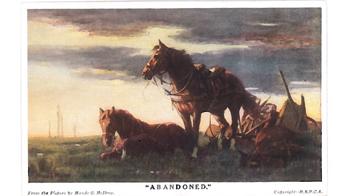 Of the 2.5 million injured animals admitted to the Army Veterinary Corps during the First World War, over 85 per cent were treated and returned to duty.

Our role was to try and reduce animal suffering and provide swift and humane treatment to animals forced to serve in war.

Crucial to the war effort

Between August 1914 and December 1917 more than 1,850,000 horses and mules were treated in veterinary hospitals and 80 per cent treated were returned fit for duty.

This was critical as most of the British Army used horse, especially along the Western Front. It was horses that were used by Cavalry regiments, to pull the guns, to bring up supplies and to pull the ambulances for injured soldiers.

It was not just the horses which were vital to the army, but many other animals like messenger pigeons and dogs.

During the war we established temporary kennels at Boulogne in France for dogs belonging to men going on leave as quarantine restricted the animals' return to the UK.

When the war ended, we then set up the Soldiers Dog Fund to meet the cost of bringing the dogs over and keeping them in quarantine until the demobilised men were able to take them home. Five hundred kennels were specially built at Hackbridge, Surrey, to house the dogs.

It is estimated that 484,143 British horses, mules, camels and bullocks died between 1914 and 1918. And many hundreds of dogs, carrier pigeons and other animals also died on various fronts. Many of our inspectors lost their lives in their attempts to save animals forced to participate in war.

Print Animals in World War One