Hunting with dogs was banned in 2005 in reaction to public. They were strongly against the cruelty of wild animals being chased, often to the point of exhaustion, before being purposely set upon by packs of dogs for so called 'sport'.

We believe that chasing and killing live animals with dogs is barbaric, outdated and has no place in modern Britain. The vast majority (typically 70-80 per cent) of the British public agree with our stance.

Thankfully the Hunting Act seems safe after the Conservative Government - for the first time since its passage 14 years ago - has committed to not seek a vote on repealing it, which is very reassuring.

Trail hunting involves laying a trail for hounds to follow, using urine, body parts and carcasses from animals such as foxes. Some fear trail hunting is being used as a smokescreen to get around the law and continue traditional, illegal fox hunting, which would be a major concern.

This new 'sport' was adopted by hunts after the Hunting Act 2004 was passed. But despite the ban on traditional hunts, continuing to train hounds to follow such scents could lead to wild quarry animals such as foxes being disturbed, chased and killed if they pick up the scent of a live animal on the trail. In addition, the hunts' dogs may well disturb non-targeted animals, who then may also suffer from injury and stress.

We're opposed to any so-called 'sport' which causes suffering to animals. We believe that the use of the scent of dead animals is totally unnecessary as other alternatives exist, such as drag hunting, in which hounds follow an artificially laid scent not derived from animals.

This doesn't pose a threat to wildlife if done correctly and in accordance with the law.

What more needs to be done?

2019 saw successful prosecutions against hunts by the Crown Prosecution Service. This shows that the Act can be enforced, but we would like to see amendments made to strengthen it further.

We believe the following amendments would improve the Hunting Act 2004:

Join us in campaigning to protect the welfare of domestic, farmed and wild animals by signing up to receive our campaigns newsletter. 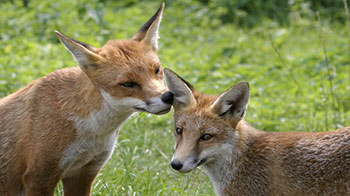 Fact vs. Fiction - the myths surrounding the Hunting Act

We debunk some of the myths surrounding the Hunting Act.