Originally introduced from North America, grey squirrels are now common in England, Wales and central Scotland. They mostly live in broadleaf woodlands containing oak, beech, sweet chestnut and hazel, but are also found in a wide range of habitats including parks, gardens and urban areas where there are suitable trees.

Keep reading to discover more about the grey squirrel, or learn what to do if you've found an injured grey squirrel.

What do grey squirrels eat?

Grey squirrels mainly eat seeds and plant buds, shoots, fungi and flowers, but will also eat insects and birds' eggs, and will take food from bird feeders in gardens.

Squirrels will retrieve nuts they've buried mainly using their sense of smell, but they also have some form of a mental map of locations. However, many of the nuts and seeds buried aren't rediscovered, which helps the growth of new plants.

Should you feed grey squirrels?

Squirrels make a spherical nest out of twigs and leaves, typically found in the forks between branches at least 6 metres off the ground. They'll also use tree cavities and occasionally nest inside roof cavities.

When grey squirrels are born

Usually, squirrels will have two litters of young a year - one between February and March and the other between June and July. Litter size averages three to four babies. Baby squirrels' eyes open at four weeks and they start to explore outside the nest at about six weeks old. They're weaned by ten weeks and then quickly become independent at around 10-12 weeks.

The difference between red and grey squirrels

Here's how to tell them apart and what to look out for. 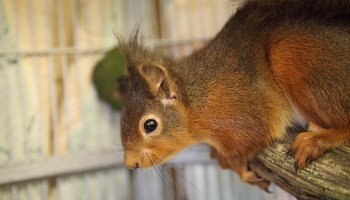 Grey squirrels can't be released back into the wild

According to the law, 'The Invasive Alien Species (Enforcement and Permitting) Order 2019', it's no longer possible to rehabilitate and release grey squirrels.

Follow the links below to find out more about how to help the grey squirrels in your area. 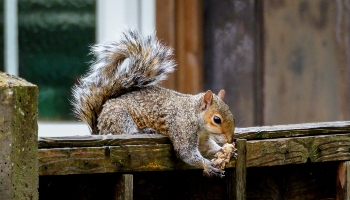 Should you feed grey squirrels and what they eat. 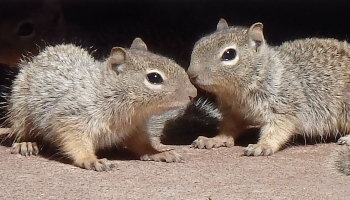 Found a baby squirrel on the ground

Reuniting them with their mum is their best chance for survival. 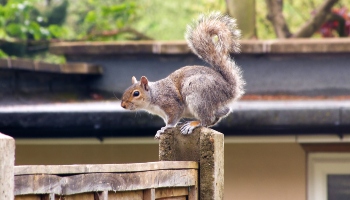 Keeping grey squirrels out of your garden

Some people consider them as a nuisance.