Genetically altered (GA) animals have had deliberate changes made to their DNA, for example by adding or removing genes, to give them a specific characteristic. Animals with the desired characteristics will usually be used to breed more GA animals for use in a particular area of research.

Here's more on why we're worried about it.

The breeding and use of genetically altered animals has rapidly increased over the last 20 years and GA animals are now used in almost 70% of all scientific procedures in the UK. 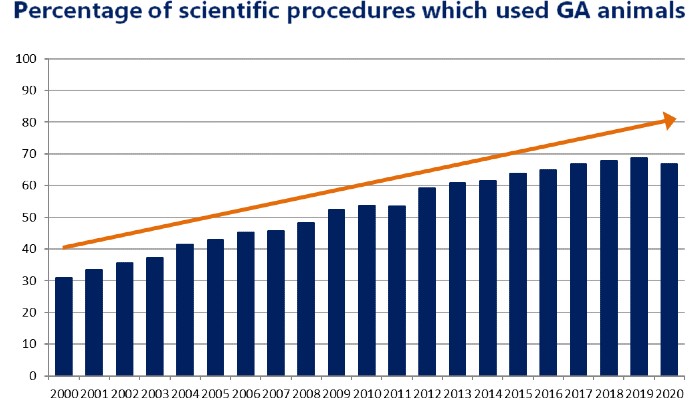 Most GA animals are mice, rats and fish, and are used:

Some farm animals, such as chickens, goats, cows and pigs, have also been genetically altered:

Recent developments in science and technology mean that changing the DNA of an animal can now be done faster, more easily and cheaply and on a greater number of species than ever before.

However, the outcomes are often unpredictable and the procedures cause suffering and waste animals' lives. This is true even for newer 'gene editing' techniques (such as 'CRISPR'), which are claimed to be 'more precise'.

Our view on genetically altering animals

There are also well-founded public concerns about 'naturalness' and interfering with the integrity of the animals. These concerns should be properly explored and given due respect. We believe that gene editing animals should stop for all applied purposes, such as farming, until the risks to animals have been fully assessed and the public has been properly informed and consulted.

We actively engage with all people involved in the use of animals in science, from governments and regulators to companies, universities, students and animal technologists, promoting measures that reduce animal use and suffering by: