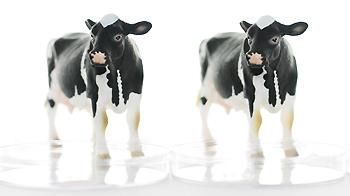 Why are animals cloned?

Cloning techniques are used to try and produce exact 'copies' of a particular animal. The use of cloning technology is often justified by statements that the research could lead to cheaper methods of producing medical treatments and food products. Cloning techniques have also been, or are being used, to create 'copies' of:

We believe there is no justification for cloning animals for such trivial purposes.

How are animals cloned?

The cloning process usually involves removing genetic information, known as DNA, from a cell taken from one animal and placing this into an egg cell from another animal. This must be an unfertilised egg that has had its own DNA removed. This egg is then artificially stimulated to start developing into an embryo and placed into a surrogate mother animal. See our simple graphic: Cloning animals (PDF 316KB)

Cloning is a serious concern for the RSPCA. The process involves scientific procedures that can cause pain, suffering and distress,with little consideration for ethics or animal welfare. Cloning never creates a true copy of the original animal; all animals are individuals with their own personalities. We would like people considering cloning their beloved companions to adopt an animal who needs a home instead.