There are three main stages in pig production.

Individual stalls prevent sows from turning around, allowing only limited movement forwards and backwards. They were banned in the EU in January 2013 although their use is permitted for up to four weeks after mating.

They were completely banned in the UK in 1999.

Group housing gives sows more freedom to move and socialise. However, without suitable management and facilities problems with aggression can occur.

Sows are kept in groups with access to large bedded huts for shelter. They have more space and can explore and forage in their environment. Weather and the type of land can make ensuring sow welfare a challenge.

Prevent the sow from turning around and aim to reduce the risk of the sow crushing her newborn piglets. They have a heated 'creep' area to attract the piglets away from the sow when not suckling. Whilst most sows in the UK farrow in crates some producers use indoor pen systems which do not confine the sow, although numbers are limited.

Sows are provided with individual shelters ('arcs') and straw to build a nest. Movement of the piglets is restricted for the first one to two weeks by a barrier around the entrance, in order to keep them in the warm arc. Approximately 40 per cent of sows in the UK give birth outdoors.

Sows are placed into farrowing accommodation up to a week before they are expected to give birth and remain there until the piglets are weaned at around 28 days of age.

Most pigs, including those born outdoors, are put into indoor accommodation for growing/finishing after weaning.

Only three percent of pigs will spend their entire lives outdoors.

Over ten million pigs were slaughtered in the UK in 2017¹.

Find out about some of the key welfare issues for pigs. 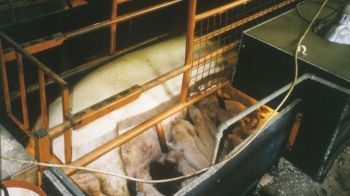 Some of the key pig welfare issues that concern us. 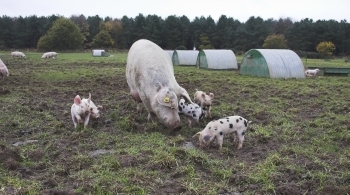 Pigs - how can you help?

How can you help to give pigs in the UK and beyond a better life?