We've backed a petition by a dog trainer and welfare campaigner calling for a ban on the importation of dogs with cropped ears. 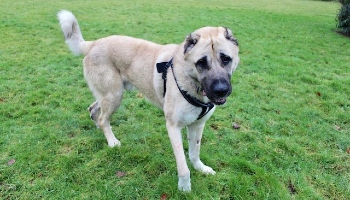 It's illegal in England and Wales, under Section 5 of the Animal Welfare Act 2006, to crop a dog's ears. However, the practice is still legal in other parts of the world, such as the USA and some European countries, and there's a fear that more and more dogs are being sent abroad for cropping and being purchased and imported from overseas.

We've seen a 236% increase in the number of reports of ear cropping and cropped ears during the last five years. From 2015 to 2019, we've had 178 reports of the practice.

Staff who investigate complaints of the illegal practice fear that celebrity culture, images shared on social media - especially from abroad where the practice is unregulated - and an increase in bull breeds seen in advertising is normalising the look and making it more popular.

The petition has already gained thousands of signatures

We're supporting dog trainer and passionate advocate of positive, reward-based training methods, Jordan Shelley, who has launched a petition calling on the Government to ban the importation of dogs with cropped ears. More than 7,800 people have already signed it.

"There appears to be an alarming rise in dogs imported after undergoing the inhumane procedure of having their ears mutilated, fulfilling the desire for a certain 'look' and encouraging a procedure outlawed in England since 1899. It's time to close this 121-year-old legal loophole.

"An import ban could be possible under trade rules. There are companies that specifically import dogs with cropped ears for UK owners, fuelling cruelty abroad.

"It's time to make imports illegal, raise awareness of the cruelty around cropped dogs and advise the public not to support those that use cropped dogs in advertising and on social media, as they're inadvertently promoting this painful practice."

Ear cropping is a painful and unnecessary practice in which a dogs' ears are removed or surgically altered. It doesn't benefit the dog in any way and can actually be detrimental to their health, behaviour and welfare.

"While we do have concerns that ear cropping is being carried out illegally, and underground, in this country, we suspect that the majority of dogs with cropped ears are being sent abroad to have the procedure done or are being bought and imported deliberately from countries with less stringent animal welfare laws and regulations than here.

"Dogs should never be mutilated for cosmetic purposes and, while this practice has been illegal in this country for a long, long time, we'd like to see more regulation to ensure that it's no longer possible to get a cropped dog in England and Wales unless rescuing through a reputable organisation."

Anyone concerned that someone might be cropping dogs' ears themselves, arranging ear cropping in the UK or sending their dogs abroad to have the procedure done should report it to us by calling 0300 1234 999.

You can see Anna White from our Southridge Animal Centre with her dog, Eaton, and Kirsty Withnall from our Special Operation Unit talk about problems we're facing on dog imports and cropped ears on the Crimewatch Roadshow - BBC One, Friday at 9.15am.