We issue collar warning after cat dies from injuries

We issue collar warning after cat dies from injuries

We've issued a warning to pet owners about the dangers some collars can pose to cats. 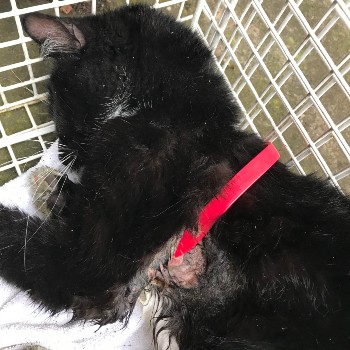 It's very important that cats wear the right type of collar as not doing so can lead to severe injuries and can even be fatal.

Last year, we saw more than 60 reports of cats who had been injured by their collars coming through to our helpline.

Collar cutting into the skin

Our inspector Kate Levesley was called to collect a cat in Aston, Birmingham last month (December 6) after the black, female cat was found collapsed on the side of the road with her leg stuck in her collar which had been cutting into the skin under her arm.

This poor cat was suffering terribly and in a really poor state as a result of her collar injury. I think she had most likely been in this state for a while before someone spotted her. I rushed her straight to our Birmingham Animal Hospital but sadly she died just as the vet was about to bring her in. It was so incredibly sad. She wasn't microchipped and no owner was ever found.

These types of collars are such a hazard to cats who can so easily get stuck in them.

Use quick-release collars to avoid injuries 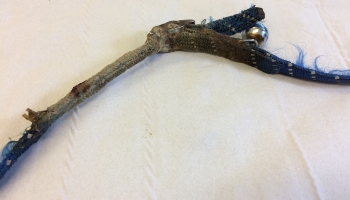 Cats are natural hunters and curious explorers and enjoy pushing through tight spots, so it's imperative that any collar is designed to free the cat should they become snagged and so they don't get their leg caught.

A quick-release collar is designed to snap open when tugged with sufficient force and can ensure that a cat is released from its collar if they become stuck.

Elasticated collars or collars with buckles which don't release without human help, can leave cats struggling to free themselves when their legs become stuck - causing horrific and sometimes fatal injuries.

Some collars can do serious damage

Tabby cat Ollie came into our care in July last year after being rescued in Biddulph. He was also suffering from a severe injury to his neck as his leg had become stuck in his buckle collar. It's believed he'd been straying with this injury for around three weeks. The collar was completely embedded into his neck and the wound was extremely smelly and infected.

He underwent surgery and was cared for at our Stapeley Grange Cattery in Cheshire where thankfully he made a full recovery and was later rehomed.

Black cat Poppy was rescued by Animal Welfare Officer Liz Braidley in Sheffield in March last year, after being found with a severe collar injury under her right front leg. She spent weeks at the vets having her wound intensively treated. The vet fostered her for seven months while she recovered and then decided to give her a forever home.

Last January, grey long-haired cat Charlie was rescued by us in West Yorkshire after he was spotted limping with his foot stuck in his collar. He had developed a nasty wound which had become infected and smelly. The collar had become so embedded in his armpit it had caused muscle damage.

The vet concluded he had been suffering for two or three weeks before he was rescued. Poor Charlie underwent surgery the next day and thankfully recovered well. He was cared for by our Halifax, Huddersfield, Bradford and District branch as well as one of their fantastic fosterers for almost a year before he finally recovered and was rehomed.

Too many cat collars for sale can cause harm

These stories serve as an important reminder to cat owners to only use quick release collars on their pets as other collars can be lethal.

All too often we get called to cats that have become injured due to a collar as there are too many dangerous collars on sale. We would strongly advise against purchasing a collar with buckles that don't snap open, or collars made from elastic.

The majority of flea collars are also not advisable as they don't have safety buckles, so we would encourage pet owners to prioritise safety first and give your cat flea treatment another way.

The most reliable way to identify your cat is to have them microchipped rather than having a collar and tag which may fade over time, or hinder them when they explore.

This winter, we expect to rescue thousands of animals from neglect, cruelty and suffering. Already at Christmas, we received more than 44,000 calls to our cruelty line. To help our rescue teams continue to reach the animals who desperately need us this winter, Join the Winter Rescue.