As the UK today announced the free trade deal with Australia, the RSPCA raises serious concerns that this deal will mean beef and lamb imports produced to lower animal welfare standards will enter the country as well undermining the UK's position as a leader on tackling climate change. 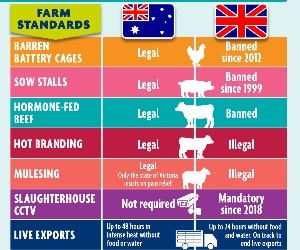 The RSPCA, along with other NGOs, trade unions and civil society organisations from across the UK, have today sent a joint letter to the Secretary of State for International Trade to raise their concerns.

Australian food production follows much lower animal welfare standards than in the UK which means that this Free Trade Deal will make it easier for products which would never meet the UK production standards to be imported and sold in the UK. This will include imported beef from cattle raised on enormous, bare feed-lots and suffering transport times of up to 48 hours, and lamb from sheep that have been mulesed without anaesthetic, a mutilation that is banned in the UK. Concerningly, as the UK's procurement standards allow in low welfare imports, these products could even find their way onto the menus of public sector organisations and into the meals of school children and hospital patients who don't have a choice about the origins of their food.

We have serious concerns about a free trade deal with Australia and the impact this could have on animal welfare, UK farmers' livelihoods, and our strides in tackling climate change.

The deal provides a bad precedent for how the UK maintains its high welfare standards as it starts negotiations with other countries. Cheap low quality imports could also undercut farmers and, if more trade deals follow suit, devastate the UK's farming industry. This is bad for consumers, farm animals and British producers, who rightly abide by the UK's higher standards.

Australia also has a poor track record on climate change and an intensive model of agriculture which has damaged the natural environment and led to major deforestation. This deal would therefore set the UK back in its aims to become climate leaders.

Whilst we are pleased with the specific animal welfare provisions in the Agreement, worryingly we see no signs that the UK Government is willing to safeguard our animal welfare standards in other parts of the Agreement. This deal sets a dangerous precedent now that we are embarking on deals with countries such as India, Canada and Mexico, all of whom have lower animal standards than here and the potential to send across eggs, chickens and pork meat, produced under what would be illegal standards here, into the UK market.

While the deal has the best animal welfare provisions in any Free Trade Agreement, it contains no safeguards such as non regression clauses on animal welfare and has no red lines on how to ensure equivalency in animal welfare standards, unlike the New Zealand agreement which was published last month.

This highlights there is a rush to agree a trade deal with Australia without looking at the consequences for our farm standards or for future agreements with other countries. The UK risks having some of the highest standards in the world but no one farming to those standards.

As our first trade agreement since leaving the European Union, it is really vital the government gets it right and ensures our welfare standards are safeguarded or it could give a clear signal to other countries that the UK's international trade policy has no red lines when it comes to upholding animal welfare standards.

In Australia it is legal to mutilate the rear end of sheep, sometimes without anaesthetic. Egg laying hens are kept in battery cages and chicken can be washed with chlorine. Cattle may never see a blade of grass and almost half the herd are given growth hormones.

Because a high bar was not established in the Australia deal, UK trade negotiators' hands will be tied when they try to clinch higher welfare deals with other priority countries such as the USA, Canada, India and Mexico, all of which have lower animal welfare standards than the UK.

The UK should be proud of its animal welfare standards and strive to maintain and improve them, but there's a danger this has been sold out for the sake of a quick trade deal.