Share this...
Rescuers help animals caught up in floods

Our team has been called to more than 70 flooding incidents and has rescued dozens of animals.

Our dedicated officers and specialist water rescue teams have been called in to help rescue animals caught up in the floods.

We've responded to 73 calls related to the flooding 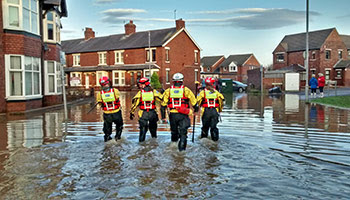 Officers continued to help animals in need on Tuesday (12 November), with three boats launched in rescue missions. One team was working near Rotherham, catching swans that needed cleaning and treatment after floodwater caused a barge to overturn, triggering an oil spill that affected around 60 birds.

Meanwhile, another team were dispatched to Fishlake - which has been severely impacted by the flooding - for a rescue mission of a large number of domestic animals kept by an elderly man who¿d had to evacuate his home.

We were called by the fire and rescue service to help at a flooded property in Fishlake. The water rescue team worked with the fire crew to check that the site was safe to attempt a rescue.

A team of seven local officers and specially-trained water rescue officers attended and launched a boat. We liaised with the homeowner¿s son to retrieve the keys for outhouses where a number of small animals and birds were being kept. We then ensured the animals would have a safe place to go once rescued.

Our team consists of 60 specially trained officers who can assist with water rescues. We placed our staff on standby last week as a large number of flood warnings and alerts were issued across the country. The officers will remain on standby until Friday (15 November). Jason added:

Areas in South Yorkshire and Derbyshire have been hit extremely badly and, with a lot of floodwater still in place and more rain forecast this week, we will remain on standby and ready to respond if needed.

60 swans and 70 hedgehogs have been rescued

We've launched an emergency fundraising appeal on Facebook following a large oil spill in the Doncaster area which has affected around 60 swans, with money raised going to our wildlife centres supporting the clean-up operation.

In Nottinghamshire on Friday, an Inspector helped local people save 70 hedgehogs from a flooded sanctuary while another officer helped rescue three cats and two goldfish from a flooded home in Matlock, Derbyshire.

And on Thursday, our Inspector, Kristy Ludlum, was called to a flooded field in Maltby, South Yorkshire, to lead three horses to safety. She worked with the horse¿s owner and fire and rescue crews to move the horses to higher ground.

Our dedicated team are hard at work whatever the weather

At our call centre, based in Dearne Valley, South Yorkshire, staff have been busy working around-the-clock to deal with reports from concerned members of the public - despite struggling to deal with the flooding themselves.

Many dedicated staff members had to walk miles through floodwaters in wellies to get to work on Friday - despite some of them having had their own homes flooded that day.

While some employees couldn¿t get home and so slept on a sofa at the office before working another shift. One team member with a 4x4 drove around collecting workers so they could make it in.

Find out how to help ensure pets and livestock stay safe in harsh weather conditions.

Alternatively, our full flood advice for small pets, horses and livestock can be found under our seasonal advice.