He may be missing a full pout - but that doesn't stop Fig giving you a big sloppy kiss! 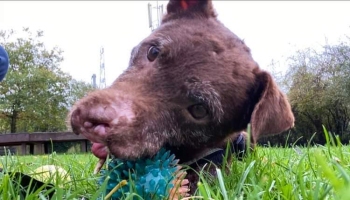 We took in Fig - the patterdale terrier type dog - last month after he was found with horrific injuries to his mouth, jaw and lips which were suspected to have been caused by badger baiting.

An information appeal was launched after he wandered into a yard at Painscastle covered in mud, extremely thirsty and with severe injuries to his face and mouth. We were made aware of Fig when he was taken to a vet in Hay-on-Wye by a member of the public on Wednesday 14 October.

We still haven't found out what happened to Fig

Our inspector Keith Hogben said Fig's injuries were "one of the worst" he had seen in his 20-plus years working for us.

We've received a few calls about this incident - and would like to thank those who got in touch. However, we've sadly not been able to find out what happened to him and where he came from. Fig is such a lovely dog and we hope once he is fully recovered he'll find a forever home.

Fig has been healing well despite his injuries

Since he's been in our care, Fig - who has been described as a happy and loving dog - has been recovering from his ordeal extremely well.

Our senior clinician at Merthyr Tydfil Veterinary Clinic, Jonathan Fitzmaurice - who has been treating Fig - said they've been using pain relief on Fig for his wounds and antibiotics for the short term as luckily he hasn't developed any major infection.

He'll develop scar tissue but never be able to replace the lips. However, he's bright and happy and eating well - although some food does spill out due to a lack of lower lips. This will be permanent but he doesn't seem to mind at all.

Fig still has some healing to do

Fig is next due to have a procedure at our Merthyr Tydfil Veterinary Clinic to remove the exposed canine tooth and possibly to have some skin graft done. It's hoped that he'll be made available for rehoming in the near future.

Fig will have undergone around £300 of treatment after his upcoming operation, with the additional costs of boarding and the initial vet costs. Donating just £12 could help pay for a much-needed clinical examination for rescued animals at one of our hospitals.

If you find an animal in distress or suspect any illegal activity concerning animal welfare, please call us via our cruelty line - 0300 1234 999 - which is in strict compliance. Any little bit of information could help our investigations.