A puppy we rescued after being abandoned in a bucket with his siblings has grown up to become a 'crime-fighting hero'. 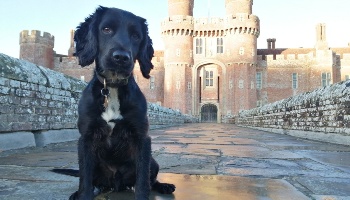 Four six-week-old cocker spaniel pups were found dumped in a blue bucket and left in the front garden of a home in Redhill, Surrey, in July (2019). An inspector was called to rescue the dogs after they were found by the shocked homeowner and were taken in by our Millbrook Animal Centre.

The puppies were almost bald due to severe mange, had chronic eye and ear infections, and were extremely malnourished and underweight.

Jo Douglas, from the centre, helped to care for them when they arrived. She said:

The poor puppies were in a real state. They needed four different types of eye drops and two ear drops which had to be administered four times a day, plus medicated baths for their skin. 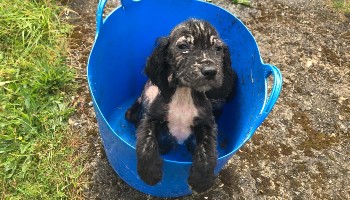 After weeks of treatment, the puppies - named Dustin, El, Lucas and Mike, after the Stranger Things characters - were rehomed to loving families. El, Lucas (now called Reggie) and Mike all settled in brilliantly but, unfortunately, poor Dustin struggled in his new home and was returned to the centre.

Dustin was always on the go and needed constant stimulation and, sadly, he was just too much for his new owners so he came back to us. We kept him busy by hiding tennis balls around the centre and playing scent games with him. He loved it and was really good at following his nose so we contacted the police to see if they'd be interested in taking him on as a new recruit.

Jo was invited to see him working. She said:

"I was lucky enough to go and see him when he was training and it was amazing to watch him work. That day, he even found a gun, ammunition, money and drugs; he's such a clever boy!

"When he graduated, the police sent us a copy of his certificate and an official photo of him which we now have hanging in pride of place at Millbrook. We're all so proud of him. It's been incredible to see the transformation he's made from a frightened, poorly little puppy to a brave and clever canine crime-fighting hero!"

There's a new recruit in town

"I was saddened to hear how Badger had been dumped on the side of the road but, thanks to the RSPCA, he's been given a second chance. After a lot of love and training, he has regained trust in humans and become a real success story. He's still very mischievous at times, but that's all part of the challenge!

"When he hears the radio go off he squeals with excitement and I don't even have to ask him to get in the van. He's a joy to work with. He's hard not to love. He's still got that cheeky side to him but he's obsessed with work and he makes me smile all day."

Dogs we rescue go on to do amazing things

We've worked successfully with a number of police dog units up and down the country and have seen dozens of unwanted, neglected and abandoned dogs go on to become successful police dogs and sniffer dogs.