A celebrity dog breeder has been banned from keeping dogs for life and ordered to pay more than £10,000 in costs after he admitted to taking part in illegally cropping puppies' ears. 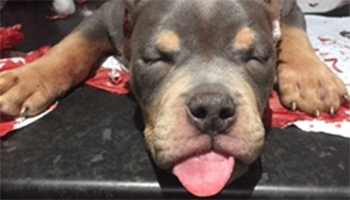 The breeder then sold for the puppies for thousands of pounds to customers including Little Mix singer Leigh-Ann Pinnock and her footballer boyfriend Andre Gray. Geordie Shore cast member Aaron Chalmers was also identified as a customer.

Simon Davis was arrested by Warwickshire Police alongside our team of inspectors during a joint raid at his home address in Warwickshire. The raid took place on 30 January last year, at the location where he also based his American Bulldog breeding business.

During the raid (known as Operation Warhol) officers led by our inspector, Herchy Boal, found seven kennels and runs in a converted garage building in the breeder's back garden containing eight American Bulldogs. 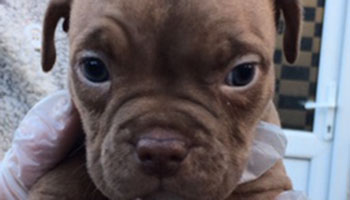 Coventry Magistrates' Court heard today how seven of the puppies he had bred and sold had cropped ears - a painful cosmetic procedure in which part of the ear is cut off with a knife or razor blade to make the dogs look fiercer.

Ear-cropping is illegal in the UK under the Animal Welfare Act unless it is carried out for medical reasons.

Photographs found on Davis's phone during the investigation show some of the puppies he bred as they were undergoing the procedure at the premises.

During the raid at Davis's home, investigators came across signs in the back garden featuring the words 'Lions Lair Kennels' - the name of the business he promoted on Instagram as a well-known breeder of American Bulldogs - selling puppies for between £3,500 to £7,000.

The dogs were sold for thousands of pounds to celebrity clientele 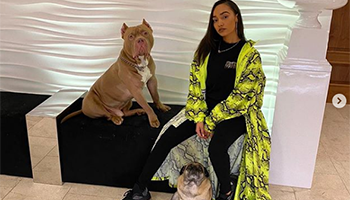 The prosecution told the court that one of the puppies, called Kyro, was bought by Little Mix singer Leigh-Ann Pinnock and her footballer boyfriend Andre Gray.

While, Geordie Shore cast member Aaron Chalmers also purchased a dog from the same litter, called Lenny, from the kennels. Both Kyro and Lenny feature in the offences which Davis pleaded guilty to at a previous hearing.

Further dogs were found including two who were pregnant

A further nine American Bulldogs were found at Davis's mother's address in nearby Chelsey Road, including two pregnant dogs, six of these also had cropped ears.

As further inquiries were made, we gathered evidence which showed how Davis had sought to buy ear clamps which are attached to the ear and used as a stencil so the desired 'uniform shape' is created during the cutting process.

Evidence showed that he also wanted to buy a table to carry out operations on. Messages on his phone were also discovered that showed the breeder seeking the services of a 'cropper'  from the USA, known as Marchelo, to carry out the illegal process.

In addition, photographs showing pups before and after cropping as well as items used in surgery such as syringes, razor blades and forceps were seized from both properties.

It's not clear the extent of the pain caused

As a result of the publicity created by both Simon Davis and the kennel, alongside the celebrity purchasers, there have been numerous images of Lions Lair puppies in the media, including in the USA.

It's also impossible to say whether any of the operations carried out had complications at any stage which would have caused further suffering to the dogs or puppies such as infection etc. 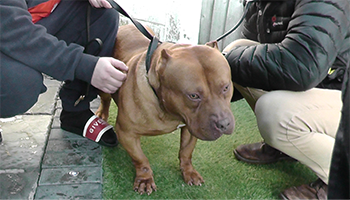 Davis pleaded guilty to seven offences under the Animal Welfare Act when he appeared at Nuneaton Magistrates' Court on 17 December.

As well as the lifetime ban on keeping and dealing in dogs (which can not be appealed for 15-years), Davis was also ordered to pay £10,973 in costs, given an 18-week prison sentence suspended for 12 months and ordered to carry out 160 hours of unpaid work.

We're opposed to ear cropping - a process where ears are removed or surgically altered. It's painful, wholly unnecessary and often done only for the purposes of appearance. Dogs should never be mutilated for cosmetic purposes and ear cropping can actually be detrimental to their health, behaviour and welfare.

We'd urge people never to buy a dog with cropped ears and to report any concerns about ear cropping by calling us on.

The dogs will be available for rehoming soon

Seven of the dogs were taken into our care and will be up for rehoming soon. They'll be joining dozens of other dogs and animals who are waiting for their forever homes. Why not take a look at the dogs in our care? You never know who you might fall in love with...