A guest blog by supporter and rehomer, Ciara Spence.

This is Bailey - he was our first rescue dog. My family adopted him when he was nine years old. We found Bailey online and fell in love with the brief description of a nervous boy with a lot of love to give. In his picture, he looked almost desperate and we wanted so badly to love him and give him a good 'retirement,' as we called his later years.

"He had waited his whole life to love and we were the lucky ones who received it." 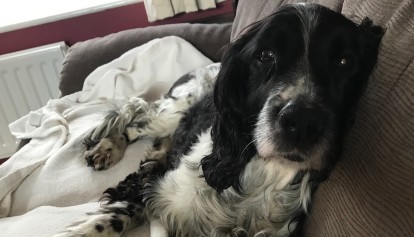 Every day his unbridled joy taught us so much about loving unconditionally. The more we tried to give to Bailey, the more he was ready to give to us. He had waited his whole life to love and we were the lucky ones who received it.

That's the thing - you don't adopt an older dog for you, you do it for them. But you get so much back that, in the end, it won't be clear who helped who more.

When you adopt an older dog, you're already getting a fully developed personality with peculiarities and eccentricities galore. The most rewarding part of having Bailey was watching these blossom. Once he trusted us enough to show them to us, with every little funny trait he revealed, we loved him even more.

One of the first quirks we discovered is that Bailey would sing along to the Eastenders opening theme tune, we still have no idea why! 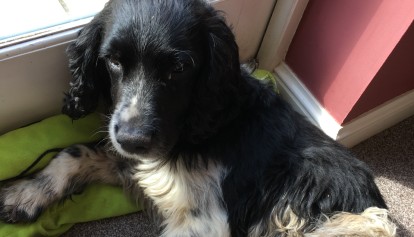 Rescuing is not without its challenges. As you don't know where these quirks come from, it can be difficult at first to help your dog flourish and move on from any negative behaviours. When we first adopted Bailey, he really struggled when my brother would leave the house.

It was so bad that he made his snout bleed banging it against the front door trying to go with him when he left for work.

Luckily, within a couple of weeks, once we had worked with Bailey to settle him into his new home, the behaviour changed completely.

Whether it was the realisation that there was always someone home with him or perhaps that those who did leave always came back, we were amazed at how quickly he learned to trust that he wasn't being left behind.

During these first few months, I was home with Bailey the most and so we developed a very strong bond. When we took him to the sea for the first time, he seemed nervous of the waves (this wasn't surprising as he was nervous of most things), so I waded out into the water until I was waist-deep to tempt him in. 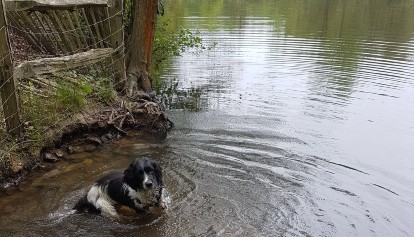 He seemed worried about me and was eventually spurred into swimming out on a 'rescue' mission. However, once he got close, he just stopped swimming and let himself sink under the water until only his ears were floating above the surface.

I quickly became the rescuer and floated him back to shore. Tummy height paddling was enough from then on!

It's through trial and error as well as by building trust between you and your dog that you truly learn their limits and find what you can work on together. Bailey never did master water and fell into streams, ponds, puddles and even the odd crazy golf obstacle as a sort of clumsy party trick for the rest of his happy retirement.

"We're still unsure how he managed to get through a shut bedroom door and into a closed wardrobe..."

The one habit we battled with the most with Bailey was his almost supernatural ability to scavenge. We assume this was sadly borne out of necessity in his previous life but that didn't mean we could let him off the hook too much!

In the first few months that we had him, we had to rush him to an out of hours emergency vet as he had managed to track down and consume the most enormous Easter egg he could get his paws on.

We're still unsure how he managed to get through a shut bedroom door and into a closed wardrobe, but on a few occasions, he seemingly defied the laws of physics if it meant he could steal a treat! No matter how much he learned to trust us, we couldn't seem to get him to trust that we knew better on this one and were trying to stop him from inadvertently poisoning himself.

We quickly learnt to adapt our behaviour to help him be better; we never left food out, even in places it didn't seem possible for him to reach. However, despite our best efforts, he caused some mischief one year at Christmas when he snuck away for less than a minute and was found attempting to make off with the turkey. He certainly knew how to get into the festive spirit!

Bailey's overwhelming personality trait was happiness. This took only a few days to shine through the nervousness and is the trait so many rescue dogs are overflowing with once they're given the chance. 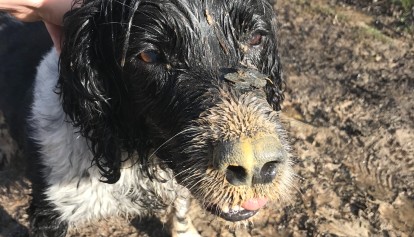 The first time I let him off the lead on a walk, he crossed the length of the field in record-breaking time, tearing around with his tongue hanging out, for the entire hour and a half.

In his whole two years with us, the loveliest and most rewarding part of owning him (aside from the affection, obviously) was that he never seemed to get used to the fact that he would have a walk every day!

Every time we picked up his lead or I got my walking boots out, he would get so excited as though he was saying; 'another walk?'. It was so rewarding to be shown every single day how much joy he got from the smallest actions. Seeing the love you're pouring into your dog reflected back in ways like this made me grateful every day that we had found each other.

"We got to give him a happy ending to his story"

The most rewarding thing about rescuing a dog is seeing the growth and happiness in them once they're given the love they need and this is even more true when it comes to senior dogs. Whilst it may be harder as a pet parent, as you're aware of the limited time you have to spend with your new friend, your dog is oblivious to that sadness - all they know is happiness and love. 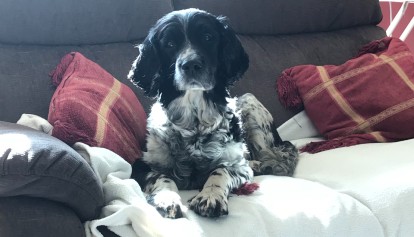 Seeing Bailey's time with us as his retirement didn't make saying goodbye after only two and a half years any less painful, but it did make every moment sweeter.

We got to see the hurt and worry of his previous years melting away as his coat became shinier, his eyes brighter and his tail infinitely waggier.

We got to give him a happy ending to his story, even if he was only a few unbelievably happy chapters in ours and I couldn't be more grateful to him for sharing those with us. I hope everyone gets the opportunity to have their own Bailey.

Thinking about adopting a pet?

Start the search for your perfect pet now. You never know who you might find!