Rats are social creatures and need the company of other rats. They use their sense of smell to recognise others, finding out about where they've been and what they've been doing.

As rats are social animals, they can get depressed and develop abnormal behaviour if they live on their own. Rats kept with other rats are just as friendly with people, so here's more on how to keep rats together.

Introducing rats to each other

Pet rats should be housed together from a young age and should ideally be siblings. They should be kept in small same-sex groups and are perfectly happy without the opposite sex.

When adult rats who don't know each other are housed together there will be a period of high aggression, but this shouldn't last long and should drop once they establish a dominance relationship.

Fighting between cage-mates is rare, but you can spot it when:

If newly introduced rats continue to be aggressive to each other, especially if one or more of them get hurt, this may show that they're unable to reach a stable dominance relationship and so shouldn't be housed together. Rats may suffer if they can't escape from others they don't like.

How to avoid aggression within a group of rats

You can help reduce aggression if you:

Having multiple levels in their home cage can also help act as barriers to aggression. Make sure that shelters have multiple exits to avoid particular rats stopping other cage-mates from leaving the shelter.

Signs a rat is being aggressive to the others

Aggressive grooming indicates social stress in groups of rats, as does strong vocalisation during an aggressive encounter.

If you see increased aggression in a group of usually stable rats, this could indicate that there is a problem. Check the health of your rats and that something hasn't changed in their cage. Monitor your rats carefully, as they can also show aggression towards their cage-mates when they're in pain. If you're concerned, ask your vet.

Consider separating your rats if one is hurt or frightened by the other and the problem lasts for more than a few days.

Protect your rats from other pets and animals

Mask the sounds, sights and smells of animals your rats may be afraid of, such as cats, dogs, ferrets and birds of prey. Rats are a prey species and these animals can cause them stress.

How to get rats used to being handled

Rats can build close relationships with you, and you can successfully train them. Start by having regular gentle and calm contact with your rat to slowly allow a bond to develop. Allow them to investigate your hands in their own time and reward them with treats to help them enjoy your company.

How to pick up rats

Handling carefully and considerately, in a confident but gentle manner. Never pick rats up using their tails - this is stressful and can injure them.

When picking up your rat, let them sniff your hand before gently lifting them up, with one hand placed under the body and the other loosely over their back.

Never hold them at a height, as if they jump or fall they can injure themselves. 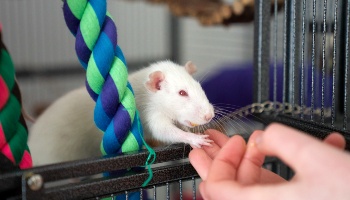 Find out more about the behavioural needs of rats 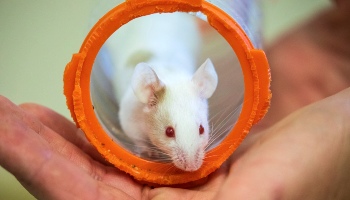 Learn about mice and their behaviour and get expert advice on how to keep mice healthy and happy. 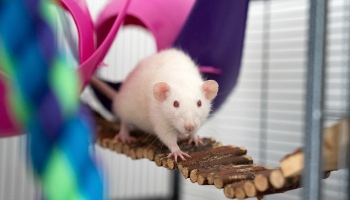 Creating a good home for rats

Find out more about the environmental needs of your rat