‘The Boy Did Good’ 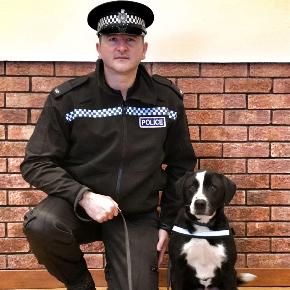 In May 2016 Bandit was accepted into the care of our Brent Knoll Animal Centre when his owner was no longer in a position to provide for his care.

He arrived as a young bouncy dog who was full of beans and loved to play. We struggled to find the off button but that was ok, Bandit was always keen to keep the staff and volunteers busy whenever he could.

After 3 months living in kennels and keeping everyone on their toes, Bandit was adopted in August 2016 to a family in Devon. Very sadly he was returned to us in February 2017 following some miscommunication between dog and owner.

And so the search for a suitable home began for a second time.

As the staff continued to work with him, his love for toys, particularly tennis balls, became ever more apparent and so following chats in the staffroom we decided to contact PC Lee Webb to see if Bandit would be suitable to work with the Police.

Following a period of foster, Bandit was adopted by Lee and into the Police Dog Training Centre.

We are very proud to announce that last week (March 2018) Bandit passed all of his training and is now a fully fledged Drug Detection Dog pictured here with his handler.

Bandit the Police Dog….. Who’d have thought it!!!