The amazing story of Joker 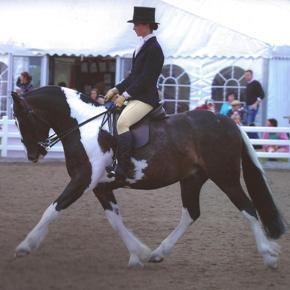 Out of so many sad cases seen at the RSPCA Hillingdon Horse Haven, come many heart-warming success stories. We want to share with you the story of Joker, a very special young stallion.

Some of our supporters may remember when Joker arrived with serious head injuries in 2012.  He was left unattended wearing a head collar which was too tight and his face became ulcerated and infected, the collar embedded deep in his flesh. Recovery was slow, but Joker’s lovely nature shone through and he became a favourite at the centre and with volunteers who went on to help with his backing and training. Joker was adopted into a wonderful home, and has gone on to take part and excel in various equine shows. We were delighted and very proud to receive this report from his new owner:

"When Joker first arrived with us at Team Holder I was very excited when Gayle said he could become mine to bring on and compete, he lacked in a lot of muscle and condition. He had a big trust issue with people in his personal space, especially men and was also extremely protective over food.

"Since then he will allow anyone into his stable without getting defensive or dart to the back of his stable. He has now built up muscle and also a cheeky character which has shown with his success throughout the year.

"Joker was backed last summer and then turned away until the winter and has progressed faster than I ever imagined. Starting with a few a smaller shows he seemed to take it all in his stride, so we thought perhaps try a few Royal international qualifiers, and yes Joker came through and qualified at BSPS area 13B. Riding at this amazing show was a dream come true for me, to do so on this great animal with such a touch and go start to his life made it even more special.

"Moving on Joker and I then went onto contest the Ponies UK summer Championships held at Stoneleigh. Competing over the two days Joker and I were never out of the top four and rarely out the top two. From Joker achieving such fantastic results throughout these two days he qualified for the evening performance which for any baby horse can be quite frightening but for Joker he just shone and sparkled rising to the number of eyes that may have been upon him. Almost every judge who has ever judged Joker has made the effort to come up to us and mention how much they look forward to seeing him in the future.

"When Joker is not out showing he is out hacking which he thoroughly enjoys or he is jumping. He is even occasionally the teaching pony as he is brilliant with people who have never ridden or just beginning. Not only has he shown great potential in the showing ring but also over a fence. Joker made me so proud flying round his first ever show jumping course, not only did he fly round but he went on to win his class. This pony just never fails to amaze people.

"We may have managed to save this pony from a dreadful end and given him a bright future but he has also made dreams come true and shown that anything can be possible. I cannot wait to be lucky enough to carry on his bright future and perhaps continue my dreams and even attend Horse of the Year Show.

"Thank you to Jill Ridley and The Horse Haven for rescuing such an amazing pony."