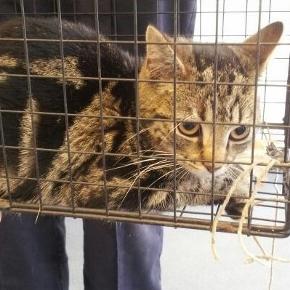 Spencer the cat was a stray who came to the branch in unusual circumstances. On a grey morning in March, the branch received a phone call from The Pavilions shopping centre in Uxbridge to say that there was a cat stuck in the air conditioning duct on the roof.

An RSPCA Officer went to investigate and it took the entire day to get frightened tabby, Spencer, out; not a job for anyone scared of heights!

If the shopping centre had turned their air conditioning on, it would have been the end of Spencer, but luckily he was brought to safety unharmed.

Understandably shaken up, Spencer was brought straight to our Hillingdon Clinic for a check over, and recuperated at our rehoming centre. It’s possible he had been stuck there a while as he was very hungry when he reached us. A few weeks after his scare, Spencer was still wary of sudden movements but enjoyed having a fuss made of him and grew in confidence every day. We hope this young man looks after his other eight lives.