RSPCA Sussex North branch is celebrating the success of Bailey, an Akita/Shepherd cross, who has been crowned the highest fundraiser at the RSPCA Big Walkies event, which was held in October at Southwater Country Park.

The inaugural event is believed to have raised around £1,000 for the local RSPCA branch which covers Horsham, Crawley and Haywards Heath. Bailey was the top fundraiser, gaining sponsorship of over £115.

Anita Marsland, chair of RSPCA Sussex North branch, said “I am delighted that Bailey was the highest fundraiser for the branch at Big Walkies this year and to present him with a well deserved goody bag. Well done Bailey!”

Four year old Bailey was adopted from RSPCA Leybourne Animal Centre, in Kent, by Andrea Grounds and her husband John, from Broadbridge Heath.

“Bailey joined our family when he was 18 months old after spending quite a lot of his early life at RSPCA Leybourne. He's a real character and we are so happy to have him with us.” said Andrea

“The whole family supports the RSPCA and my husband used to work there. We admire the work done by the inspectors and the dedicated staff and volunteers at the rescue and rehoming centres as well as the campaigning and lobbying work done at national level.”

The presentation of the goody bag to Bailey, and his owners John and Andrea, took place at the RSPCA charity shop on East Street in Horsham on Sunday 6th December and was made by Anita Marsland, branch chair.

“As a self-funding charity, we rely on people fundraising and donating so we can continue to help animals in Sussex who need our services. It’s thanks to the support of people like Andrea and John that we will be able to continue.” said Anita “We are really hoping that we’ll be successful in our bid to host another Big Walkies in 2016 and that Bailey will be out again to support us!” 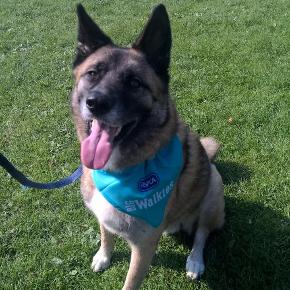