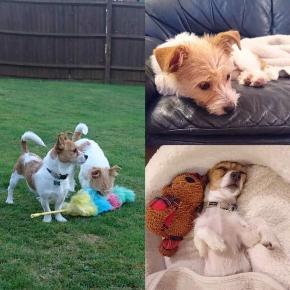 This adorable pair came into the care of the RSPCA Surrey Woking Branch at the beginning of October. Dennis was a puppy, who was full of beans and excited at the thought of what life held for him. Daisy, at the age of 2 was the opposite. She was anxious and unsure of what the future held. Dennis had lost his mother shortly after birth. Daisy, a sister from another litter, took Dennis under her wing and nursed him through the important puppy stage, creating a strong bond between the two. After a short stay at the vets to get them both back to full health, they went to one of our amazing foster homes. Daisy slowly came out of her shell and became happier and more confident with the assistance of brave Dennis. With faces and stories like theirs they weren’t short of attention! It wasn’t long before a lovely family heard their story. The family met them and their futures became certain. Daisy and Dennis have now started their new adventure, they are sharing all the joys of a loving home together!

We also this month re-homed a 10year old English Bull terrier x. She was looking for a new home due to changes in her family circumstances. We found the perfect home for her by the sea with a lovely lady who had recently lost her elderly staffie. They are a match made in heaven and we wish them a long life of happiness together. 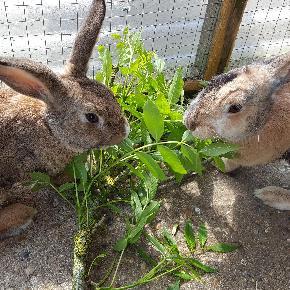 Once again, October has been a busy month with rabbits for Woking Branch with 6 adoptions. Fortunately we have successfully rehomed some very special rabbits- our Facebook followers may have seen many references to our ‘long stay’ rabbit Poppy who first came to Woking Branch in January 2017 after her owner moved house and left her behind. As she was looking for a home for so long and rabbits are social animals we decided to pair her up with Ivor, a cheeky youngster who came to us in December 2017. It was love at almost first sight- not always the case with rabbits! Shy Poppy was transformed once she had a friend- double the trouble and double the fun! We are so happy that a few weeks ago they moved in to their new home comprising of a wendy house with ramps, toys and tunnels and with a large attached run to play in whenever they please. Their new owners have done so much to ensure they need not be cramped or bored so, whilst it would have been lovely if they hadn’t been waiting so long, it seems the wait was worth it. 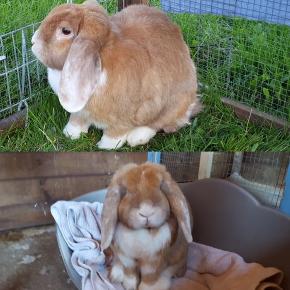 Also happily rehomed after being passed around several times before reaching  the RSPCA Woking Branch, Tyler and Tia, a pair of huge French Lop rabbits weighing over 6kgs each landed themselves a fantastic home as house rabbits with their own bedroom and the option to spend their leisure time lounging on the sofa with their new Mum who is experienced with the breed and their needs. 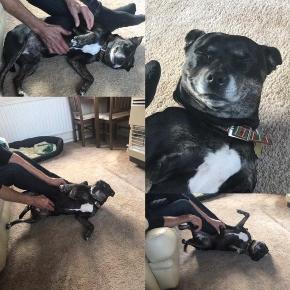 In June Layla, a 9 year old Staffordshire Bull Terrier found herself in need of a new home and some veterinary attention. Her family were no longer able to keep her which was something that Layla found very stressful. Once in a foster home it became apparent that she was severely affected with separation anxiety and wanted to be close to people at all times and became extremely distressed if parted. Before she could be rehomed she needed an operation to remove a benign lump from her leg and neck as well as being spayed, vaccinated and having some bad teeth taken out- all of which she coped with admirably and got many fans at the veterinary surgery on account of her outstandingly good temperament and stoicism. Finding a home for an elderly staffie is never easy, especially one who hates to be alone and who, despite our best efforts, could never quite stop the urge to chase the cats in her foster home if given the chance. People who are willing and able to take on such a special dog can be hard to find and the months passed with few enquiries. After over 4 months we were delighted to hear from a retired gentleman who was looking for a new canine friend and companion who would keep him company and enjoy going out and about with him everywhere. He was looking for something not too big, not too small, not too young and who would be sociable with friends and family. Who could be better for him than Layla? And who could have suited Layla better? A follow up visit to Layla and her new Dad found a very happy human and a very happy dog, just look at that smile!! 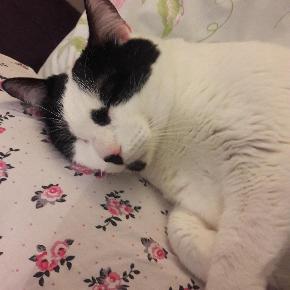 Some of our animals are lucky enough to get chosen by adopters very quickly and are soon off to their new homes. Others take much longer to find the right match but sooner or later the right home comes along.Nuvola was just such a case- she needed a new home with no small children now or in the future after becoming very distressed when her adored owner had a baby. Reluctantly her owner realised a new baby free home was needed to make Nuvola happy again. After a long wait a lovely lady offered her a home - just the two of them together virtually all the time. Having previously adopted an older nervous cat from Millbrook, Nuvola' s adopter knew how to make Nuvola happy again. The attached photo says it all!

Dates for the Diary…

It's getting close to that time of year again... The RSPCA Surrey Woking & District Branch have their annual Christmas Raffle coming up on the 15th December 2018. The draw will take place at our Horsell RSPCA Charity shop. Raffle tickets are now on sale at £1 per ticket.

Plus, many more amazing prizes!! If you would like to support us in purchasing tickets, then please contact Megan -  megan.long@rspca-woking.org.uk or 07553284028.

Horsell Village also have a Christmas Fayre held on the 1st December from 2pm to 5pm, The RSPCA Horsell Charity shop we be open as usual and there will be a stall outside the shop. We look forward to seeing you all! Any of our adopted animals and their families it would be great to see you there too!