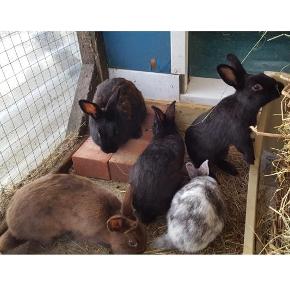 Our first rabbit adoption of the year is particularly exciting. Luna came in to the care of Woking Branch in February 2018 when she was part of an extremely large group of rabbits rescued from a backyard breeder situation. A few days after arriving Luna gave birth to a litter of 4 babies who we later named as Galaxy, Choccy, Cosmos and Fifty.

When they were old enough everyone was neutered and vaccinated and Choccy and Galaxy were soon adopted by a lovely family. Unfortunately for Cosmos and Fifty things were not quite so smooth- Cosmos developed a nasty abscess on his back, perhaps from a nip by one of his siblings and had to spend a few days at the vets until he was better and Fifty was always much smaller and more delicate than her siblings. Because of this Luna’s little family trio stayed together until everyone was fit and well.

It is very difficult to find homes for groups of rabbits but we didn’t want to separate them so tried to find someone who would adopt the little family. After over a year with no offers we were approached by a family who had adopted a small black male rabbit, Dandy, from the original rescued group (Probably Luna’s brother, we suspect) Dandy had been living a life of luxury as a house rabbit with the family’s female older rabbit but sadly, she had recently died leaving Dandy alone. His owners were looking for a small female rabbit to join him but had not been able to find one – after much careful thought, we suggested that perhaps little Fifty might be the solution. So Fifty now lives with ‘Uncle’ Dandy sharing his luxury lifestyle.

That left Luna and Cosmos waiting, but two rabbits are easier to place than three, although being pure black does tend to result in being overlooked. We were delighted to hear from somebody interested in giving these two a new home after Christmas and  1 year and 11 months after Luna arrived, she and Cosmos have gone to a permanent home of their own as part of a family who are keen to provide nothing but the best for their pets. Happily, this particular family had been especially interested in finding a pair of black rabbits! Sooner or later the right home comes along!

Piper arrived into our care towards the end of last year, sadly after changes in her family 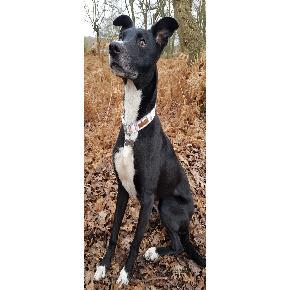 circumstances. From the start Piper was a very chilled and relaxed girl, nothing seemed to phase her and everyone she met fell in love with her. She settled in instantly at her foster home, the search for her very own forever home started... Piper wasn't short of enquiries and it wasn't long before a meet and greet was arranged with her potential new owner. Lets just say the rest is history, as predicted Piper charmed the socks off of her new mummy and in the blink of an eye her adoption was completed. Piper is living a very happy and care free life, she has settled extremely well and enjoyed a Christmas to remember by the seaside. 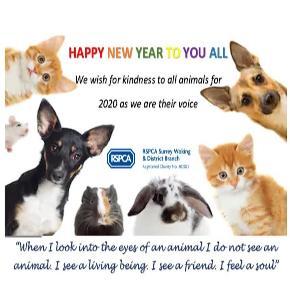 A massive thank you to everyone who has helped and supported us in 2019.