A grey seal which was found washed up on a North Yorkshire beach with serious flipper injuries is captured on video looking back at his rescuers as he is returned to the sea following four-weeks of treatment.

The injured seal was found washed up on the rocks at Cayton Bay, in North Yorkshire, on 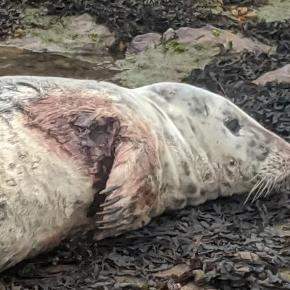 September 10 by a member of the public who alerted the British Divers Marine Life Rescue charity.

Their medics arrived at the scene that evening  and could see the grey seal had severe damage to one of his fore flippers and side of his body which would require urgent veterinary attention.

With failing light they spent an hour moving the seal from the challenging terrain of the rocks to safety.

He was taken to one of the charity’s medics, a vet nurse, who cared for the animal overnight.

The following day they made arrangements for the seal to be transported the 160 miles, to  RSPCA’s Stapeley Grange Wildlife Centre, in Nantwich, Cheshire, to help nurse him back to full health.

Centre staff named the seal Zucchini and he was treated further for his injuries and rehabilitated over a four week period.

Then earlier this month (Oct 11) Zucchini was ready to be released back to the wild and the BDMLR volunteers involved in the original rescue carried him back to the sea near where he was found.

A video captures the moment he happily returns to the sea and he is captured on camera turning around to look back at them - in what they believe may have been a show of appreciation.

Lee Stewart, manager at the RSPCA’s Stapeley Grange, said: “Staff at our centre are trained to deal with injured, sick or orphaned seals. It is not easy treating and caring for seal pups as although they look cute they are very strong and have a nasty bite.  It is however always very rewarding when we are able to see them return to the wild, where nature intended 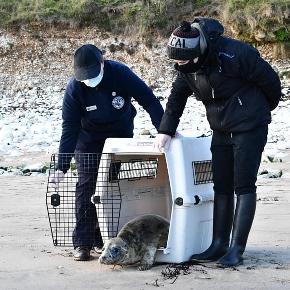 “I was really pleased to see his release back into the wild and the fact he even looked back at his rescuers was great.  We have a great working relationship with the  BDMLR who we are pleased to work so closely with.

“I would like to think Zucchini was saying thank you to all his rescuers and carers before happily returning home.”

A spokesperson for the BDMLR said: “We work closely with the RSPCA on many rescues and are always grateful for their help. It was great to see Zucchini happily return to his home. It makes our role as volunteers so rewarding.” 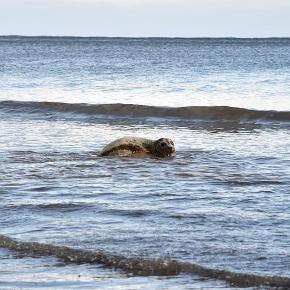 The RSPCA advises that if members of the public spot a seal on a beach that they think might need help, the best thing is to observe them from a distance and do not approach them. Seals are wild animals and have a nasty bite. Never try to return a seal to water yourself, as you may put yourselves and the seal at risk by doing this. It is also advised they keep dogs away from any seal and keep them on leads on beaches that have seal colonies too.

It’s not unusual for a seal pup to be alone, as seal mums leave their pups very early on in life. So if the seal pup looks fit and healthy and shows no signs of distress, it should firstly be monitored from a safe distance for 24 hours. At this time of year, young common seal pups that have just been weaned are now finding food by themselves so they are often seen on the beaches as they need time to rest.

If you see a pup whose mother hasn’t returned within 24 hours, is on a busy public beach, or if you think the seal may be sick or injured, please stay at a safe distance and call the RSPCA’s 24-hour advice and cruelty line on 0300 1234 999. An unhealthy seal pup looks thin (but not bony) with a visible neck, like a dog.

There is more information on the RSPCA website about what to do if you see a seal or pup on the beach alone.

A video of the seal release can be downloaded from this link https://spaces.hightail.com/receive/NIfxjYNxJ9/Y2hlcnlsLmhhZ3VlQHJzcGNhLm9yZy51aw==