The RSPCA is appealing for information about a swan shooting after the Wrexham bird was found with 6 air gun pellets in his body. 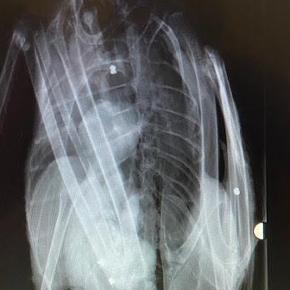 On Saturday 15th May, the animal charity received reports of an adult male mute swan dragging its leg in the grounds of Wynnstay Hall, Ruabon, Wrexham.

RSPCA Deputy Chief Inspector Phil Lewis arrived at the lake-side location to find the swan virtually immobile.  He said:  “I understand that this poor swan had been out on the grassy bank by the lake for a few days.  When I approached him, he was very flat and lethargic - very unlike a normal, healthy swan.  His condition did make it less challenging than usual to contain him in a swan stretcher and put him in my van.

“I rushed him to our Stapeley Grange Wildlife Centre in Nantwich, where the vet examined him.  The x-ray revealed six air gun pellets in his neck, leg and torso.  Sadly, because of the severity of the injuries, the vet made the difficult decision to put the poor bird to sleep.

“It’s a heartbreaking outcome and disgusting to think that someone might have deliberately shot this swan. We are now appealing for anyone who might have information about this terrible act to call the RSPCA appeals line on 0300 123 8018.”

All wild birds, including swans, are protected under the Wildlife and Countryside Act 1981 and it is an offence to intentionally kill, injure or take them except under licence. The maximum penalty, if found guilty, is six months in prison and/or an unlimited fine.

For more information on what to do if you find an injured wild animal, visit the RSPCA website.