An orphaned week-old seal pup is being cared for at an RSPCA wildlife centre after being found alone and hungry on a beach.

The weak and lethargic grey seal had been without his mum for three days on Penrhyn Beach, in Llandudno, North Wales. This was 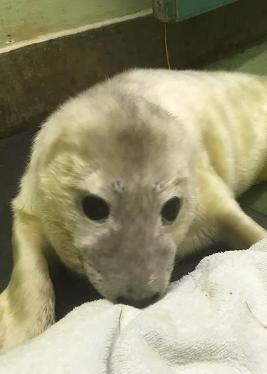 reported to the RSPCA on 30 September, who rescued him later that day.

He was taken to the RSPCA’s Stapeley Grange Wildlife Centre, in Nantwich, where staff have named him Jon Snow after the Game of Thrones character.

Lee Stewart, manager at Stapeley Grange, said: “He was being monitored by the North Wales Wildlife Trust for three days and when it became apparent that his mum wasn’t coming back to him, they called our National Call Centre for help.

“He was pretty weak on arrival as he would have been unable to feed himself on the beach. He is now on a fish soup diet and will hopefully soon be putting on weight.

“He particularly likes suckling on a towel so we are making sure he is never without one in his cubicle. We are hopeful that he will make a full recovery and can be returned to the wild soon but that may be a few months off. Rehabilitating orphaned seal pups can take up to 4-5 months.”

If you see a pup whose mother hasn’t returned within 24 hours, it’s on a busy public beach, or if you think the seal may be sick or injured, please call the RSPCA’s 24-hour advice and cruelty line on 0300 1234 999.