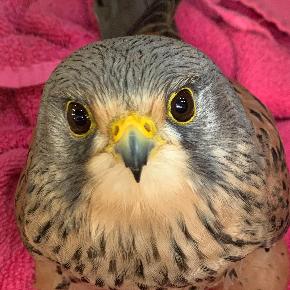 A video captures the heart-warming moment an injured kestrel rescued by the RSPCA is released and able to fly to freedom.

The bird of prey was discovered in the boiler room of a school in Doncaster by a member of the public on February 2.

They could see the kestrel was unable to fly so they managed to safely entice him into a box and took him to a nearby vet - who then reported the matter to the RSPCA.

Animal rescue officer Liz Braidley collected the kestrel and took him to Peak Vets in Sheffield where an x-ray showed that he had a fracture on the metacarpal bones.

The vet was able to strap the wing to help stabilise the fracture and the bird was transferred to the RSPCA’s Stapeley Grange Wildlife Centre, Nantwich, in Cheshire, where the kestrel spent a few weeks having cage rest in their isolation ward.

When the vet was happy with his progress he was introduced to one of the centre’s larger aviaries, giving him time to build up his strength and get back to full fitness. Being a hunter it is essential that he be returned fully fit and able to survive in the wild.

Then last week he was returned to the area near where he was found and was released back into the wild - a moment which was captured on a heart-warming video. 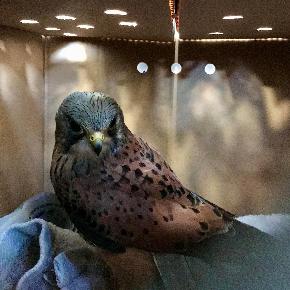 Liz said: “It is always a great feeling to be involved in rescue from start to finish and to be able to release this bird back into the wild was a great feeling. He was certainly ready to make a quick getaway.”

Lee Stewart, the manager at Stapeley Grange, said: “The kestrel needed some time to recuperate from his injured wing which fortunately wasn’t too badly damaged and needed time to build up his flying skills in a safe environment.

“When a bird is fully recovered and ready for release it is always a proud moment for everyone involved.”

If you find a wild animal in distress, stuck, sick or injured please contact the RSPCA for advice on 0300 1234 999 or visit their website: https://www.rspca.org.uk/adviceandwelfare/wildlife/injuredanimals.

¿To support the ongoing work of Stapeley Grange Wildlife Centre during this extremely difficult time, please donate to their Justgiving site: https://www.justgiving.com/campaign/RSPCAStapeleyGrangeWildlife?success=true

A video of the kestrel’s release is available on this link:  https://spaces.hightail.com/space/QjLNkmrf5T/files

Pictured left - our Kestrel moments before being released