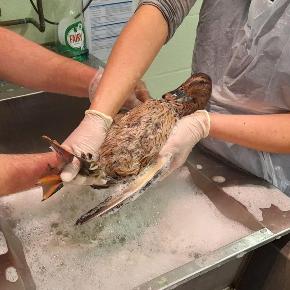 of waterfowl that were covered in oil, after someone had stupidly and illegally dumped oil in the lake.

Animal rescuer RSPCA inspector Boris Lasserre reported that this was the worst oil spill he'd ever seen. It had affected a lot of the birds very badly, with many of them collapsed and hypothermic.

It took a team of Officers and some fantastic local volunteers, to help and ultimately save 26 birds, 12 Canadian Geese, 7 mallard ducks, 2 swans, 2 tufted ducks and 3 coots. As they were rescued they were put into vans and transferred up to Stapeley where they team were awaiting their arrival.

Sadly, five of the ducks and a goose were so badly affected that they didn’t make it, but the remaining birds were washed, dried and eventually taken out side to one of the pool areas. Staff had to breaks between washes as the oil was so smelly.

If oil is not removed from waterbirds it reduces the natural waterproofing in their plumage, leaving them at risk of dying from hypothermia - so it is vital that they are treated as soon as possible.

As with all oil spills it was then a waiting game, as we are unable to return oiled birds until the oil has been removed or it dissipates naturally. On this occasion the oil had to be removed manually by the local Council.

To date a single swan, 3 coots and 4 ducks have been released back to the wild (pictured left). We are now waiting on Natural England to agree an extension of our license, which is needed to release 11 Canada Geese, which is a Schedule 9 species under the Wildlife and Countryside Act.

For more information on what to do if you find a wild animal in need of help, visit the RSPCA website at: www.rspca.org.uk/adviceandwelfare/wildlife

The RSPCA would recommend anyone who sees pollution on water or land to call the Environment Agency 24-hour incident hotline on 0800 80 70 60. Concerns for a wild animal that has come into contact with oil or other contaminants should be reported to the RSPCA’s emergency line on 0300 1234 999.