The swan, who is nicknamed Mabel, is a known character on the River Weaver, near to Monarch Drive, along with her mate Albert and their nine cygnets.

However, the RSPCA was contacted on 2 June after a member of the public became concerned about Mabel’s behaviour.

She was collected by an RSPCA inspector and taken to the charity’s Stapeley Grange Wildlife Centre, in Nantwich. 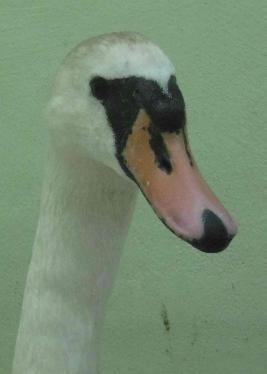 “The member of the public who contacted us said that she appeared to have an injured right leg and that she was pecking on her chest and pulling out feathers,” said Lee Stewart, the manager of Stapeley Grange. “When we able to have a proper look at her she was found to have injuries consistent with having been attacked by another animal. She had also been shot, had mites and had high lead levels in her blood - she was very poorly.

“She is now on antibiotics and is slowly improving. The main thing is that she is bright, feeding well and is maintaining her weight, so hopefully she will be moved outside soon. The team are keen to return her to the wild as quickly as possible, back with her mate and their cygnets.”

Wildlife can get lead poisoning from littered fishing tackle, especially split lead shot which have been left behind by anglers.

“This is a good example of how dangerous fishing litter is for wildlife,” said Lee. “Also, the swan appeared to have injuries consistent with being attacked by another animal. We can’t say for sure whether this was caused by a dog or a fox, but we’d like to remind people to have their dog under control when they are near wildlife.

“It is difficult to say when she shot, however it is distressing  to think that some people take pleasure in causing harm to these beautiful and defenseless birds. These are deliberate acts of cruelty and we would appeal to people’s consciences not to commit these offences.

"We would like to remind people that under the Wildlife and Countryside Act 1981 it is illegal to take, injure or kill wild birds or interfere with their nest or eggs, unless under licence. The maximum penalty, if found guilty, is six months in prison and a £5,000 fine."

It is not known why seven cygnets have disappeared, however this could be related to the animal attack suffered by Mabel.

Charlotte Wardle and her family, who live nearby, have been feeding Mabel and Albert for the last three years. Charlotte said: “Mabel and Albert are well-known in the local area and they are valued residents on our local river. We have been very worried about Mabel since she was taken in to the RSPCA’s care and we’re also concerned about the seven cygnets which have disappeared.

“Since Mabel was taken to Stapeley Grange, we have been checking on Albert and the two remaining cygnets - who we refer to as the twins. We are concerned about the family’s welfare as over the years we have seen them and other birds on the river suffering from fishing tackle-related injuries or animal attacks - so we are asking local people to look out for the wildlife and to report to the RSPCA any concerns.”

Anyone who is concerned about wildlife in the local area should contact the RSPCA’s 24-hour cruelty line on 0300 1234 999.