Stormy weather for many animals

During bouts of stormy weather, we see an increase of animals who need to be rescued because of strong winds and rain.

This week, because of Storm Ali, we have had five Manx shearwater seabirds come into Stapeley Grange after they were blown off course from their migration route to South America.

We’re not sure exactly where these Manx shearwaters came from, but they were rescued from Wales so it is possible they were from colonies on the Isle of Man or North Wales. It would seem that they hadn’t gone very far on their migration journey before the storm came.

While at Stapeley, we try our best to get them back out into the wild quickly because they are extremely nervous in captivity. Whilst in the hospital, they don’t eat for themselves, so are stomach tubed a fish soup mix four times a day. Once they are of suitable weight we will wash and dry them; they are given time for preening before they are then moved to an outside oil bird pool.  It is imperative that they are fully waterproofed before they are released. If they are not waterproofed they will not be able to insulate themselves from the cold wet environment that they live and they will sadly die. Once we know they are fully waterproofed on the open water pools we will then try and release them back to the wild as quickly as possible, often within 48 hours of being outside.  As long as the weather is suitable for their release. If they are not fully waterproofed then we will repeat the washing and drying process until they are, so it can take several washes sometimes. 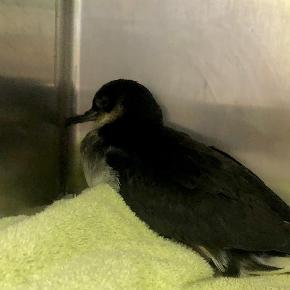 Last year, during stormy weather, Manx shearwaters were found in the most landlocked of places - including Nottingham - which just goes to show how strong the winds can blow them off course.

Once grounded, they will not eat and can't get airborne without being on water so need a helping hand.

They are distinctive birds and are easily identified by their black upper body and back, and white underside and belly. If you see a Manx

For more information on what to do if you see a sick or injured wild animal, visit our website at www.rspca.org.uk/adviceandwelfare/wildlife/injuredanimals

The RSPCA is a charity and relies on public donations to exist. It costs the centre £50,000 to feed the 6,500 animals which are admitted every year. The food bill for seals alone costs £500 a week. Anyone who would like to support the vital work of Stapeley Grange can now donate online at www.justgiving.com/campaigns/charity/rspcahq/stapeleygrange.