The young bird is currently being treated in our hospital having been taken there on 7 September.  He was found grounded on a beach in Anglesey, North Wales, by a concerned 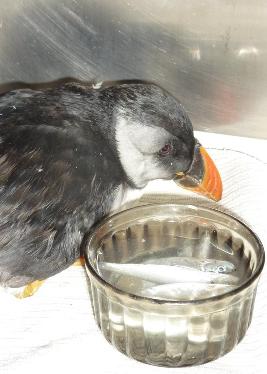 member of the public.

He was found to have a serious wound to the body and is believed to have been attacked by another animal, possibly a dog.

He was initially treated with antibiotics and given pain medication. He was extremely weak and needed time before being operated on.

The wildlife centre, in London Road, treats all kinds of birds, from pigeons to buzzards – but it is very rare for the team to treat a puffin. This is only the eighth puffin to be admitted in over ten years.

Puffins spend autumn and winter out at sea and come to the UK’s shores in spring and summer to breed. 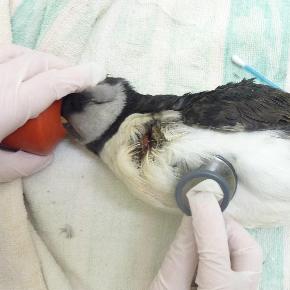 Lee Stewart, manager at Stapeley Grange, said: “The wound has now been cleaned up and a lot of necrotic tissue removed. The remaining tissue looks healthy, which is good news.

“He is feeding well and even putting on weight, which is encouraging. Now only time will tell if the wound heals and the puffin regains full mobility of the wing.

“We are hoping to get him fit and well as soon as possible so that he can return to the Atlantic Ocean.”

If you would like to help RSPCA Stapeley Grange with a donation of just £3, simply text RSPCA2 to 70007. Texts cost £3 plus standard network rate.