Two adult swans have been re-rescued by the RSPCA following a second oil spillage in a Lancashire canal in recent weeks. 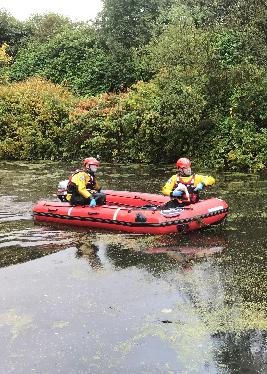 Five swans and an Aylesbury duck were rescued by the animal welfare charity’s water rescue team from the canal near Victoria Street, Hyndburn, following reports of contamination in the water earlier this month (Oct 5).

The swans were returned to their home after they had the oil deep-cleaned from their feathers at the RSPCA’s Stapeley Grange Wildlife Centre, in Nantwich, Cheshire, and the oil spillage had been cleared.

A containment boom had been placed on the affected part of the canal by The Environment Agency to contain the oil spill before a vacuum would be used to clear the pollution.

But last week, on Wednesday (Nov 4), the RSPCA were called to reports that some of the swans were once again covered in oil.

RSPCA animal rescue inspector David Cottingham was sent to the scene and said it appeared that a canal barge had driven through the boom causing it to become damaged and the oil to spill across the water once again.

He managed to safely capture the two adult birds who were covered in oil. Their cygnets looked healthy but will continue to be monitored.

There were also concerns raised for a number of geese who were oiled. RSPCA water rescue officers including David Cottingham and Steve Wickham, were sent to the scene yesterday (Nov 11) but found the birds appeared to be in good health. 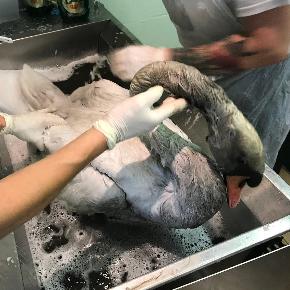 If oil is not removed from waterbirds it reduces the natural waterproofing in their plumage, leaving them at risk of dying from hypothermia - so it is vital that they are treated as soon as possible.

Every oiled bird is assessed on arrival to Stapeley Grange and sometimes multiple deep cleans are needed to remove all the contaminates.  It can be fairly labour intensive, sometimes taking two members of staff 30 minutes for each wash.

Lee Stewart, manager at Stapeley Grange, said: “The swans were once again washed thoroughly before they were transferred to outside pools to recover and once it is safe they will be returned home to their cygnets.

“In the meantime RSPCA animal rescuers will continue to monitor other birds in the area. If necessary they too will be brought to our centre to be cleaned.

“If birds with oil on their feathers preen and try to clean themselves, they ingest the contaminants. 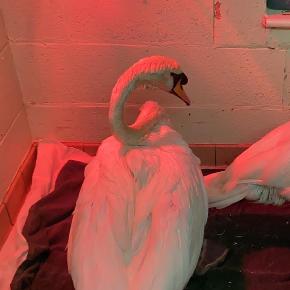 Also while they are preening they are not feeding and may become weak so we have to act fast before this happens.  With daily temperature dropping it is paramount that we rescue and clean up these birds as quickly as possible as they will likely die if left.”.

Concerns for a wild animal that has come into contact with oil or other contaminants should be reported to the RSPCA’s emergency line on 0300 1234 999.

To help the RSPCA keep rescuing animals like these and keep our animal hospitals and centres running for emergency treatment and round the clock care through these unprecedented times, please donate whatever you can spare at www.rspca.org.uk/covid.

A video of the swans returning to their home can be downloaded from this link: https://spaces.hightail.com/receive/Cryn1nN4uk/Y2hlcnlsLmhhZ3VlQHJzcGNhLm9yZy51aw==