UPDATE - A video of the swans returning to their home can be downloaded from this link: https://spaces.hightail.com/receive/Cryn1nN4uk/Y2hlcnlsLmhhZ3VlQHJzcGNhLm9yZy51aw==

The RSPCA launched a water rescue operation yesterday to save oil-covered birds from a contaminated canal in Lancashire.

The animal welfare charity was first made aware of a spill on the canal near Victoria Street at Clayton-le-Moors on Monday, 5th October, and were able to catch two swans which had been blackened with the oil.

But to save the other swans and ducks it was decided an RSPCA operation involving a team manning a water rescue boat would be required.

A team of five water rescue officers returned to the scene yesterday to carry out the operation and they managed to catch three more swans and an Aylesbury duck (team pictured with swan below).  If oil is not removed from waterbirds it reduces the natural waterproofing in their plumage, leaving them at risk of dying from hypothermia - so it is vital that they are treated as soon as possible.

RSPCA Deputy Chief Inspector Carl Larsson said:  “An RSPCA rescue operation was put in place to save the swans and ducks which have become covered with oil.

“We used a team of five officers trained in water rescues and a water rescue boat to help us catch the oiled wildlife.  All the birds are preening to try and clean themselves but while they are doing this they are not feeding and they will become weak so we have to act fast before this happens. 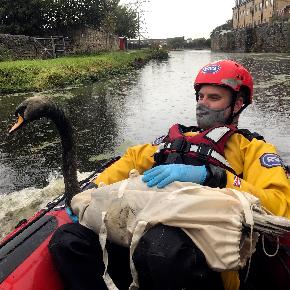 We believe some other birds may have been affected by the oil but they had flown away so local officers will be monitoring the area over the coming days and will capture any more wildlife affected who will also be treated to remove the oil.”

All the birds were taken to Stapeley Grange Wildlife Centre, in Nantwich, Cheshire, where they will be cleaned (pictured) several times to get rid of the oil.

Every oiled bird is assessed on arrival to Stapeley Grange and sometimes multiple deep cleans are needed to remove all the contaminate. It can be fairly labour intensive, sometimes taking two members of staff 30 minutes for each wash. 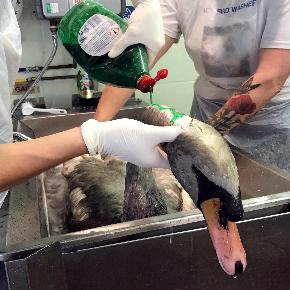 Lee Stewart, manager at Stapeley Grange, said: “Cleaning just one bird can use half a bottle of washing-up liquid, and oiled birds sometimes need to have multiple washes to be completely cleaned of the oil

“If there are no other injuries the washed birds can be transferred to outside pools with other swans, geese and ducks. It's then a waiting game for the oil to be removed or for it to dissipate before returning them home.

“The Aylesbury duck will be rehomed as it is not wild and we believe was illegally dumped at the site.”

The RSPCA has notified the Environment Agency about the spillage and once the area is cleaned the wildlife will be returned to the canal.

To help the RSPCA keep rescuing animals like these and keep our animal hospitals and centres running for emergency treatment and round the clock care through these unprecedented times, please donate whatever you can spare at www.rspca.org.uk/covid.

A video can be downloaded from this link: https://spaces.hightail.com/receive/sXgKj3ZlMG/Y2hlcnlsLmhhZ3VlQHJzcGNhLm9yZy51aw==