RSPCA called to rescue gull hanging helpless in a tree

The RSPCA is reminding anglers to safely dispose of netting, lines and hooks after a black headed gull was found with three fishing hooks and line embedded in his beak which left him hanging helpless from a tree. 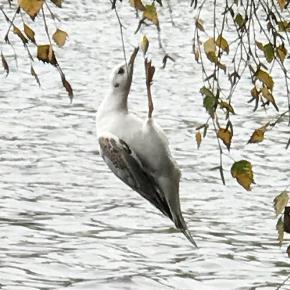 gull hanging from a tree over the water at Westport Lake in Burslem on Tuesday (20 Oct).

Animal rescue officer Julie Lyons was called to the scene and could see the poor gull had a fishing hook in his beak - still attached to a line - which was caught in a tree and he had been there for some time unable to free himself.

With the help of local council wardens she was able to reach the gull. She quickly transported him to Stapeley Grange Wildlife Centre, in Nantwich, Cheshire, where the gull is making good progress and is expected to be released back to his home as soon as he has recovered.

Julie said: “The gull was obviously distressed and was unable to free himself so if he had not been spotted he could have suffered a lingering death. 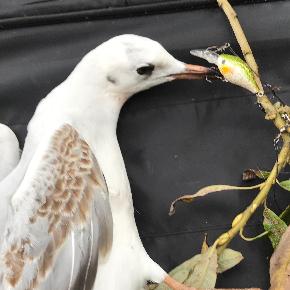 “It is possible the cast got caught in a tree and the angler cut the line and sadly the gull went to investigate and got caught himself.”

Lee Stewart, centre manager at Stapeley Grange, said: “The gull is now recovering well in our isolation unit (pictured below) and we hope to return him to the wild soon.

“Sadly fishing litter in our waterways is a major problem and it is so damaging to wildlife and sadly we have to deal with many incidents of this nature.

“I would urge all anglers to be responsible and remember to take home any litter if they go fishing – discarded lines and hooks can easily snag water birds and other wildlife, causing terrible injuries, suffering and even death.”

The latest incident comes as the RSPCA revealed it had received 21,600 reports of animals injured or caught in litter over the past five years.

In Staffordshire, 658 calls about animals affected by litter were made to the RSPCA across that 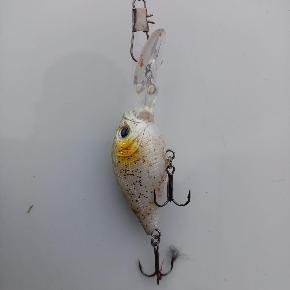 period. Most anglers are very responsible when disposing of their litter, but it only takes one careless person to endanger the life of an innocent animal.

The RSPCA asks all those who enjoy fishing to join the Angling Trust’s Take 5 campaign and make use of the Anglers National Line recycling scheme to dispose of their waste tackle and line.

For information about how to dispose of your fishing litter properly please visit www.rspca.org.uk/adviceandwelfare/litter/fishing.

¿ Take unwanted fishing line home and cut it into pieces before putting in the bin.

¿ Dispose of any litter you see, even if it’s not your own.